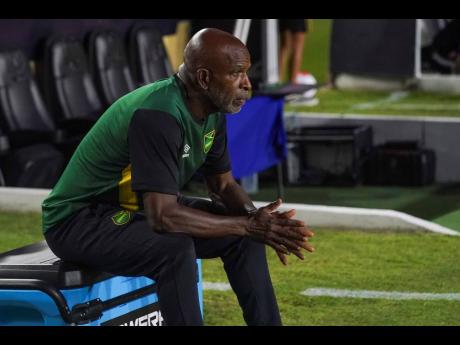 REGGAE GIRLZ coach Lorne Donaldson now has a unique set of achievements. After he guided the senior national women’s team to a second consecutive FIFA World Cup qualification, he then had the pleasure of seeing his Real Colorado U17 girls’ club...

After he guided the senior national women’s team to a second consecutive FIFA World Cup qualification, he then had the pleasure of seeing his Real Colorado U17 girls’ club defeat Beach Futbol Club of California, 3-1, to win the Elite Clubs National League title at the National Championship tournament in Richmond, Virginia.

Although absent for the championship final due to his Reggae Girlz’s commitments, Donaldson masterminded his team’s route to the showpiece over the course of a gruelling season.

Donaldson also believes that having both squads training together during the Reggae Girlz two-week training camp in Colorado for the Concacaf Women’s Championship and World Cup qualification tournament left a positive effect on the young Colorado players who went on to win, what he describes as, one of the toughest age-group championships in the world.

“These girls had a long season with a lot of travel. Every other weekend they were in another state playing and to end up winning the final is momentous. I was very happy for the group to see them win it.”

“When the (Reggae) Girlz were training in Colorado, they were training hand in hand, and a lot of the coaches came out and looked at me training our young players and the national team.

“I put both of them together trying to get the best of both teams to achieve their goals and, I thought the training was positive for both teams and they both did it (achieved objectives).”

He said it was a proud moment and he had to take a moment to make sure it was all for real.

“It happened hours apart and so you had to ask yourself if this really happened and so fast. But it actually did.

“It is one of those moments that you might not see happen again and I thought it was a good moment for all the hard work,” he said.

The former Cavalier player noted that as president and coaching director of the club, he has no obligation to coach. However, he likes to be actively involved.

“I don’t have to, but I always want to coach and remain active in coaching. Our club has 6,000 kids and we play against top clubs in the country and some of the best players in the world, and we ended up winning the national championships, which is very hard to win.

“The coaches took over after I left and they carried it through and it is a big deal for them. They (players) are a good group and some of these girls will end up playing for the USA and some of them are in the pool for our national teams.”