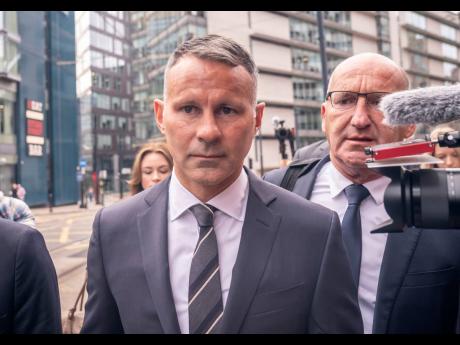 FORMER MANCHESTER United star Ryan Giggs, adored by fans throughout a 24-year career, has a more sinister side to his character, prosecutors said on Monday as he went on trial on charges of assault and use of coercive behaviour against an ex-girlfriend.

Prosecutor Peter Wright told the jury at Minshull Street Crown Court in Manchester that while Giggs’ soccer skills were a thing of beauty, his off-field life was very different.

“In the privacy of his own personal life at home or behind closed doors, there was, we say the facts reveal, a much uglier and more sinister side to his character,’’ Wright told the jury. “This was a private life that involved a litany of abuse, both physical and psychological, of a woman he professed to love.”

The 48-year-old Giggs is accused of assaulting Kate Greville, 36, and causing actual bodily harm at his home in Worsley, greater Manchester in November 2020. He is also charged with common assault of Greville’s younger sister during the same incident, as well as using controlling and coercive behaviour towards his former girlfriend between August 2017 and November 2020.

Giggs has denied all of the charges. He stood down as manager of the Wales national team in June, saying he didn’t want to jeopardise preparations for the World Cup later this year in Qatar. He had been on leave since November.

Wright said the case stems from an incident on November 1, 2020, that began when Giggs and Greville were out with friends at the Stock Exchange Hotel in Manchester.

During the evening, Greville decided to end their relationship because of Giggs’ behaviour and because she knew he had been cheating on her.

Greville left the hotel early, planning to return to the home she shared with Giggs, retrieve her belongings and leave before he came home, Wright said. Greville asked her sister to meet her at the house for support.

The plan failed because Giggs came home earlier than expected and argued with Greville as he tried to stop her from leaving. A physical altercation began when Greville took Giggs’ mobile phone to use as a bargaining chip and Giggs tried to grab her device, Wright said. Greville’s sister was elbowed in the jaw after she tried to intervene, he said.

“At that stage, we say, the defendant entirely lost self-control and he deliberately head-butted Kate, thereby causing swelling to her lips and bruising,” the prosecutor said.