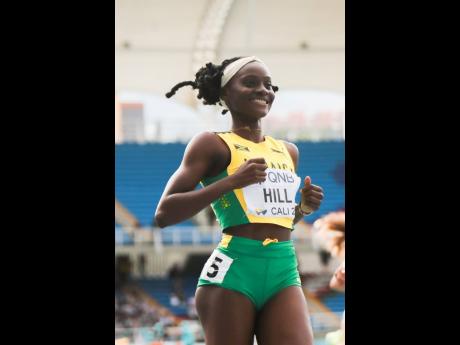 NO LESS than 1998 Commonwealth 100-metre hurdles champion Gillian Russell-Love thinks that new World Under-20 champion Kerrica Hill could develop into a terrific senior hurdler. According to Russell-Love, the slim 17-year-old might eventually break the 12-second barrier.

Coached by Corey Bennett at Hydel High School, Hill led Jamaica teammate Alexis James to a one-two at last week’s World Under-20 Championships in Cali, Colombia, in 12.77 seconds, with James also under 13, at 12.87.

“I just wonder what’s she going to do when she gets a little bit older and a little bit stronger, a bit more experienced, because, really, I wasn’t able to run those times when I was her age, and the fact that she’s running them and she just keeps getting faster and faster,” said the woman who once held both the Jamaican senior and junior records.

Russell-Love, the 1990 and 1992 World Under-20 champion, believes that Hill could eventually take the senior event into new territory.

Hill and James had a one-two finish, achieved only once before at the World Under-20 meet.

“That was just incredible,” Russell-Love gushed.

James sliced through her first round and semifinal with personal bests of 13.04 and 12.93 seconds, respectively, with Hill responding in the semis with an under-20 world lead 12.87 seconds.

“Maybe we’ll sweep this. I just kinda had it as a thought. It wasn’t solid in my mind, but then I looked at the result and I saw one-two, and I said, ‘Wow’,” she recalled.

The previous one-two finish came in 2014 by Americans Kendell Williams and Dior Hall.

According to Russell-Love, the Hill-James quinella and the performance by the female hurdlers at Boys and Girls’ Championships indicate a bright future. “Everybody broke a record, Class IV, all the way through,” she noted.

“We don’t need, like, 120 of them running fast. We just need a handful, and that’s the two handfuls that came through and set us up on this stage to do amazing things,” advanced the 1997 World Indoor runner-up.

Last year’s World Under-20 finalist Oneeka Wilson, also of Hydel, Hill, Camoy Binger of St Jago High School and another Hydel product, Maylayia Duncan, rewrote the Champs records in Class I, II, III and IV, respectively. Hill led the way with a world under-18 record of 12.71 seconds over the 30-inch high barriers.

Senior, Class I, and under-20 competitions are contested over hurdles set 33 inches high.