‘We have deserted youth football’ 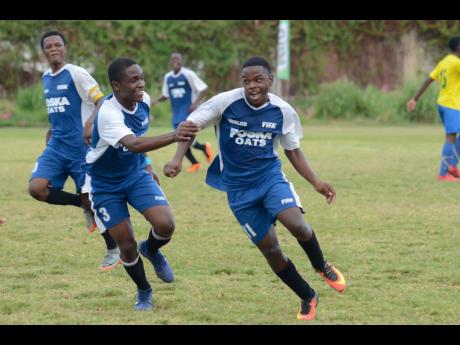 File
Cavalier’s Javon Smith (right) celebrates with his teammate after scoring the opener in his team’s 2-0 win over Santos in the KSAFA Under-15 final at Alpha back in 2018.

CHRIS JAMES, a Barbican Football Club executive, has chastised Kingston and St Andrew Football Association (KSAFA) clubs for voting to cancel the under-13 and under-15 competitions, usually held over the summer. James revealed that, at a recent...

CHRIS JAMES, a Barbican Football Club executive, has chastised Kingston and St Andrew Football Association (KSAFA) clubs for voting to cancel the under-13 and under-15 competitions, usually held over the summer.

James revealed that, at a recent KSAFA meeting to discuss the annual youth competitions, the majority of attending clubs voted not to play because they were ill-prepared and unable to manage the financial burden.

However, the veteran administrator is calling shame on the clubs, pointing to the colossal effort made to get the Major and Super leagues going, while arguing that similar importance must be placed on youth football.

“A few weeks ago it was brought up. The president threw it out to the clubs and most were not prepared to play. A lot don’t have the resources and there’s also a resource problem with referees.

“So the thought process was to wait until next season and give everyone time and space to reorganise,” he disclosed.

He believes most club leaders have their priorities wrong and are just paying lip service to youth football and development.

“The clubs are all talking but they are not serious. So it’s no surprise we are not playing U-13 or U-15 because the majority of the clubs are not prepared.

“Barbican is always prepared to play youth leagues, so if the clubs were prepared, it would have been played but most were not,” he insisted

He admitted there are clubs with serious youth programmes and commitment. However, many were missing from that meeting and James said they must take some of the blame.

“A lot of clubs did not come to the meeting and we have to be practical. If your people didn’t come to represent and the majority say ‘A’ and there is nobody to say ‘B’, then you have to live with it because we live in a democracy,” he stated.

Rudolph Speid, Jamaica Football Federation (JFF) technical committee chairman and Cavalier sporting director, is disappointed there may be no competition this year.

He noted that Cavalier were preparing for both competitions, but will now have to rely on practice games and schools to keep the youngsters’ development going.

“This is the third year there is no competition and we are very disappointed because we were in preparation.

“We have not been able to play development games and this would have given us an opportunity.

“As a professional football club, development is important to us and this does not do us any favours.

“They now have to look to next year and hope their development can continue in the schools, who give competition to players,” Speid commented.

He said the lethargic effort towards restarting youth football since the relaxing of COVID-19 safety and security measures is also reflected in our national youth teams performances recently.

“We wonder why we are not doing well internationally at the youth level. But we are doing our country a disservice when we do not hold youth competitions.

“We are behind other countries because the importance that should be put on youth is not there. We have deserted youth football.”

KSAFA President Wayne Shaw said the decision on the competitions was not final, as they were due to hold another meeting before reaching a conclusion.

“It is not official yet because we need to speak with the clubs again. Things are not looking feasible right now but we will meet with the clubs next (this) week and then we will know,” he said.

The last KSAFA youth competitions were held in 2019.