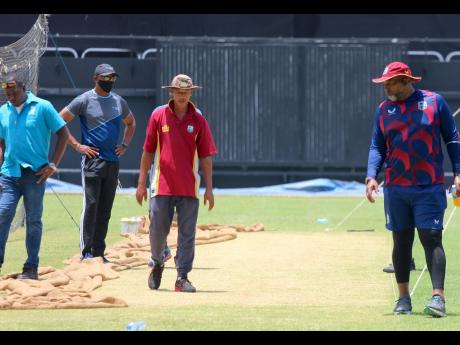 THE WEST Indies are set to play their first International match at Sabina Park today against New Zealand, eight months since Ireland toured Jamaica in January, and pundits have been questioning the readiness of the facility, following a series of non-cricketing events over the past months.

The Jamaica Premier League had made Sabina Park virtually its home ground for much of the local football season, as well as several private events, concerts and parties, which have taken a toll on the Sabina Park field.

When The Gleaner visited the ground on Tuesday, West Indies training was in full swing with the match strip covered and surrounded by nets to facilitate the practice.

Head curator at Sabina Park, Michael Hylton, who was busy with his team putting in the final touches for today’s game, assured the questioning media the pitch was in pristine condition despite all the activities.

“We were well prepared and we planned out our approach very carefully. What we did was to leave a lot of grass on and so even though there was a lot of football and things happening, that didn’t do too much damage,” said Hylton.

Hylton said that the acquisition of some new equipment by the Jamaica Cricket Association also helped in the swift restoration of the ground and both teams can expect a very good cricket wicket.

In the meantime, West Indies head coach Phil Simmons is hoping that his team can find their footing quickly and rebound from their loss against India.

He is also hoping that his team can deliver a winning start against New Zealand and give the local fans more to smile about as the country continues to celebrate 60 years of Independence.

“We keep trying to make sure that the people around the world who we represent are on a high, so that is never out of our purpose and we want to continue to do that. We try to concentrate on the things we have not done right and if we can get the things that we haven’t done right, correct, we will be in a position to win more games than we lose.”