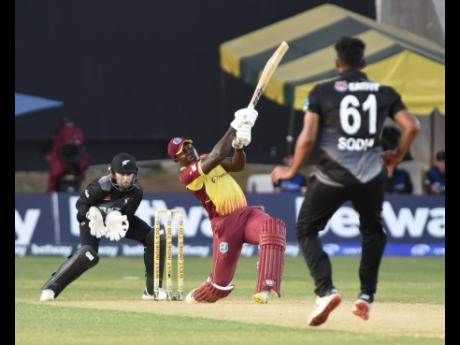 DESPITE LOSING yet another fixture in the shortest format, West Indies hard-hitting all-rounder Romario Shepherd is calling for patience even with the knowledge of a T20 World Cup just two months away.

“Obviously, we have a process for the past couple of games. We are a young team, and obviously, we have seen more and more improvements, so we just have to trust our process right now and go along with it. Even though we are losing, we are doing some really good things in between. We are going very close in every game, but we are yet to play the complete game,” said Shepherd.

Shepherd, in tandem with Odean Smith, had a record eighth-wicket partnership for the West Indies yesterday, the pair smashing 58 runs from 26 balls to take the West Indies to within 13 runs of a total they did not look destined to challenge.

New Zealand scored a challenging 186 runs for victory in the first T20 International of a three-match series at Sabina Park yesterday. The West Indies ran out of deliveries with the score on 172, just 13 runs shy of the mark.

The game was not close, though Shepherd and Smith’s strongman performances made it seem so.

Shepherd also believes that the team is still trying various combinations that work best for the unit.

“You know, we’re trying things. As you can see, today, one of our best left-arm spinners was out, in Akeal Hosein, but we’re trying new combinations each and every time in trying to get the right team for when it comes to the World Cup,” added Shepherd.

Fellow all-rounder Odean Smith believes that the game could have gone differently with just a little application.

“The guys didn’t go out and apply themselves. But it’s a team. If they don’t do it at the top, we the lower order have to come in and do what we have to do. I just think we have to perform as a team. If the guys went out and gave us a good start, it would have been easier for us at the back end rather than just trying to come and get20 runs per over, which is difficult,” said Smith.

Smith also thought the top order could have done a little better with the likes of Ish Sodhi and Mitchell Santner.

“I think the guys could have applied themselves better with the spinners because they got the wickets. I personally still have a lot to work on. I was playing on my home ground, so It wasn’t really difficult for me to go out and perform,” said Smith.