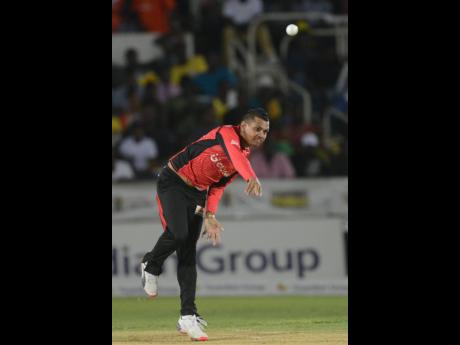 Off-spinning all-rounder Sunil Narine shone with the ball but failed with the bat, but his Oval Invincibles still did enough to take down Dwayne Bravo’s Northern Superchargers by three wickets in a tight finish at the Oval.

The 34-year-old, who has not represented West Indies in three years, snatched three for 11 in a brilliant 20-ball spell to restrict Superchargers to 157 for seven from their 100 deliveries here yesterday.

Opener Adam Lyth top-scored with 79 from 33 deliveries, but Bravo had no such luck, suffering the indignity of a first-ball ‘duck’.

In reply, Invincibles were 21 for three before Sam Curran blasted 60 from 39 balls and wicketkeeper Jordan Cox, 48 from 29 balls, to engineer a recovery and put their side over the line with three balls to spare.

The victory was the second on the trot for Invincibles after an opening defeat while Superchargers have now lost two on the trot following victory in their first game.

Sent in, Superchargers were propelled by Lyth’s fireworks, the left-hander striking three fours and eight sixes in posting 45 for the first wicket with captain Faf du Plessis (nine) and 41 for the second wicket with Michael Pepper (16).

Narine pulled things back for Invincibles, knocking over Pepper and Adam Hose (13) before hitting South African all-rounder David Wiese in front for a first-ball ‘duck’.

The left-handed Narine was then one of three wickets to tumble cheaply before Curran led the fightback in an innings comprising two fours and five sixes.

More importantly, he added 67 for the fourth wicket with Cox, who lashed eight fours, and a further 42 for the fifth wicket with Hilton Cartwright (5), before brother Tom Curran hit a seven-ball unbeaten 18 with two sixes to seal the result.