Sterling aims to spark Chelsea ahead of Spurs clash 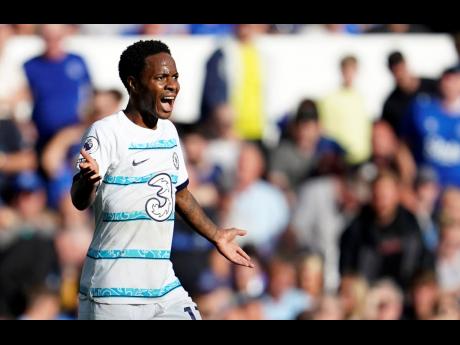 Raheem Sterling is aiming to become more of a leader and a direct attacking threat at Chelsea, after leaving Manchester City in search for more playing time.

Chelsea may need both of those attributes on Sunday when they host Tottenham in the season’s first meeting between two of the ‘Big Six’ teams.

“Inside the changing room and at the football club, there’s a developing side of me which I’d like to see a lot more, and that’s to be more involved in decisions in the dressing room, to be more vocal, and try to drive the team on,” the Jamaica-born Sterling said during a news conference yesterday.

The England winger added that another reason for joining Chelsea was that manager Thomas Tuchel wanted him to play a more direct role on the field as well.

“I think he (Tuchel) said to me it’s my directness, always threatening in behind,” Sterling said. “But most importantly, it’s how I attack the box, and with the full backs that we have here, he said that’s the one thing he wants to see a lot more.”

Chelsea are without an out-and-out striker after Romelu Lukaku returned to Inter Milan on loan and Timo Werner rejoined former club RB Leipzig. That meant Sterling played up front in the team’s opening 1-0 win at Everton, but the team often looked short of attacking ideas at Goodison Park.

Tottenham, meanwhile, brushed aside Southampton 4-1 and looked like a team that had taken several steps forward after a first full off season under manager Antonio Conte. The Italian will be returning to Stamford Bridge – where he led Chelsea to the 2017 Premier League crown – in search of a statement win that would really signal that Tottenham are ready to join champions City and Liverpool in the race for the title.

Sterling won four league titles at City after joining from Liverpool, but the 27-year-old said his decision to leave Pep Guardiola’s team was also based on the fact that he found himself on the bench more often last season.

“I just felt my time at City was getting limited on playing time for different reasons,” Sterling said. ”Since 17, I’d been a regular starting, so to get to a peak time in my career and not to play regularly, is something I wouldn’t accept. My personality is to try to fight and change the scenario, but it didn’t happen, and that’s it.”

Both Manchester clubs are in action tomorrow, with United trying to bounce back from an opening-day loss against Brighton when they travel to Brentford in the late game. City host Bournemouth in one of the five afternoon kick-offs.

English teams will all face a common challenge this weekend: the heat.

Temperatures in London are forecast to hit 93 degrees fahrenheit tomorrow, with extreme heat warnings having been issued for the southern half of England.

Premier League games will feature water breaks midway through each half to help players stay hydrated.