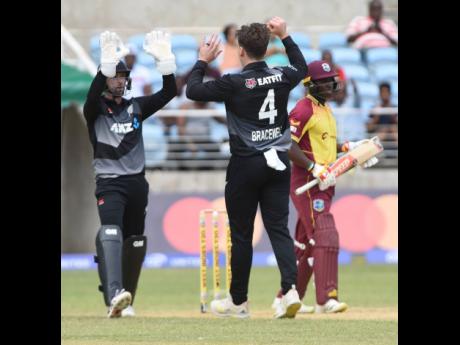 American football coach Vince Lombardi once said that winning is a habit. Unfortunately, so is losing, and that seems to be the scenario with the West Indies who continue to chalk up losses in the T20 international format.

The regional side put in one of the most dismal displays with both bat and ball yesterday to succumb by 90 runs to New Zealand in the second game of the three-match series at Sabina Park to rack up their fifth straight loss in T20 internationals.

The visitors posted a mammoth 215 for five off their allotted overs and then pegged back the hosts to 125 for nine, to suffer their second-worst defeat to the Black Caps in the format.

New Zealand’s 215 was a record at the venue in T20 internationals, and it was a former Jamaica Tallawahs player, Glenn Phillips, who led from the front with a player-of-the-match performance in familiar conditions. Phillips made 76 with six sixes and four fours.

Openers Devon Conway and Martin Guptill ensured the New Zealanders got another positive start, with 31 runs coming up within the first four overs.

It took left-arm seamer Obed McKoy to peg things back, and his double strike in the fourth over brought some respectability to the contest. He first removed Guptill for 20, then had captain Kane Williamson caught behind for four.

Conway and Phillips weren’t perturbed by those dismissals and tore into the Windies’ attack by adding 71 runs in quick time.

It took Odean Smith to remove Conway. The left-hander made 42 runs from 32 deliveries with two fours and three sixes.

Phillips got better and better as the innings drew to a close, and he brought up his half-century off just 31 balls, while adding 83 runs for the fourth wicket with Daryl Mitchell.

Mitchell powered to 48 from just 20 balls, to ensure the Kiwis got over 200 runs, before he fell to Romario Shepherd. McCoy was the pick of the bowlers with three wickets for 40 runs.

The imposing total was always going to be intimidating for the low-on-confidence Windies batters, and it was no surprise when opener Shamarh Brooks swiped at left-arm spinner Mitchell Santner’s very first ball in the third over and was bowled for seven.

Four balls later, Kyle Mayers joined his opening partner in the pavilion, when he was caught off Santner for four with only 12 runs on the board.

Captain Nicholas Pooran didn’t stick around either, as he went the very next over to off-spinner Michael Bracewell’s first ball for one.

Bracewell would land a brace when he trapped Devon Thomas in front for one, to leave the home side in tatters at 19 for four.

Those early scalps knocked the stuffing out of the West Indies who lost wickets regularly, with spinners Santner and Bracewell sharing six wickets to peg back the hosts.

Another late order show, this time from Obed McCoy 23 not out and 10 not out from Hayden Walsh, meant the Windies barely got to their fourth lowest T20 total of 125, as they surrendered the series 2-0.