Next up for Serena is Raducanu in Ohio 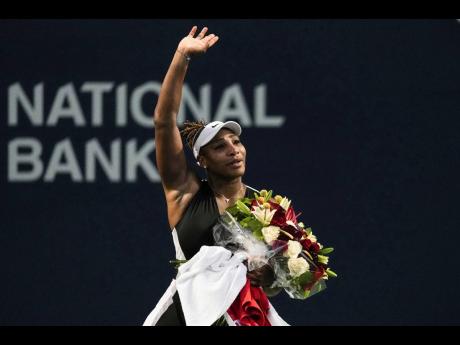 AP
Serena Williams of the United States leaves the court carrying flowers and waving to fans after her loss to Belinda Bencic of Switzerland during the National Bank Open tennis tournament in Toronto last Wednesday.

Serena Williams plays tonight at the Western & Southern Open in what is expected to be one of her final matches.

It’s a big deal, even for a US Open tune-up accustomed to hosting the world’s best players.

“Serena Williams is a global icon whose impact certainly transcends tennis,” tournament CEO Katie Haas said. “We are fortunate to have seen her lift our trophy on two occasions and to welcome her here for one of the last events of her incredible career.”

The 40-year-old Williams is preparing to walk away from tennis, saying she wants to have another child and pursue business interests. The 23-time Grand Slam champion has not said what her last event will be but did make it sound as if her final farewell will come at the US Open, which begins August 29 in New York.

Next up for Williams is tonight’s first-round match against 19-year-old Emma Raducanu, the defending US Open champion.

If Williams advances, she could face 2016 Cincinnati champion Karolina Pliskova in the second round. There also is a potential quarterfinal matchup with sister, Venus.

Serena Williams lost 6-2, 6-4 to Belinda Bencic last Wednesday night in Toronto in her first match since she elaborated on her future plans.

“She’s been a huge impact on the sport,” said Cincinnati native Caty McNally, who is making her fourth appearance in her hometown tournament. “As a kid I always watched her on the TV. I was lucky to have the opportunity to play her in the US Open a couple of years ago. I think it’s important that she’s moving on and going to spend time with her family and explore other things in life.”

Novak Djokovic pulled out of the hard-court tournament on Friday because he has not got any COVID-19 vaccine shots and so is not allowed to travel to the United States. But the Cincinnati stop still includes several of the world’s top players.