Nunez could start today for Liverpool 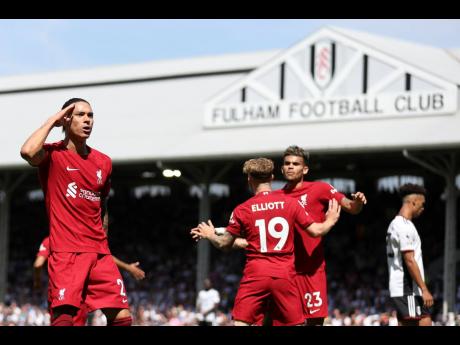 Darwin Nunez could be handed his first competitive start for Liverpool in its home game today against Crystal Palace in the English Premier League.

The Uruguay striker, who joined from Benfica in the offseason, started on the bench for the win over Manchester City in the Community Shield and the draw at Fulham in the opening round of the league. He came on and scored in both games. Nunez could take the place of Roberto Firmino while centre back Joel Matip has joined Liverpool’s injury list. Palace is also looking for a first league win, having opened with a home loss to Arsenal.

In Spain, Atlético Madrid start their Spanish league campaign at Getafe, with Álvaro Morata likely playing in the striker position after returning from a loan with Juventus and impressing in the preseason. Atlético were reportedly looking to transfer Morata to another club again but decided to keep him after his good performances. He helps make up for the departure of veteran Luis Suárez, who did not have his contract renewed at the end of last season. Athletic Bilbao, with coach Ernesto Valverde back at the helm, host Mallorca, while Manuel Pellegrini’s Real Betis host Elche.

In Italy, Juventus will be without a number of players for their opening match of the season at home against Sassuolo.

Paul Pogba, Weston McKennie, Federico Chiesa and Kaio Jorge are all injured, as is goalkeeper Wojciech Szczęsny, while Moise Kean and Adrien Rabiot are suspended. Juventus ended last season in fourth and without a trophy for the first time in 11 years.

Title rivals Napoli will be much changed from last season when they play at Hellas Verona. Captain Lorenzo Insigne and all-time leading scorer Dries Mertens both left the club in the offseason as did key defender Kalidou Koulibaly.