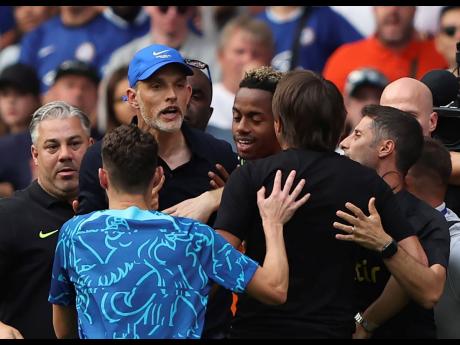 Antonio Conte and Thomas Tuchel were both sent off after clashing following the final whistle of a feisty 2-2 draw between Chelsea and Tottenham, featuring an equaliser in the sixth minute of stoppage time by Spurs striker Harry Kane yesterday.

As they shook hands on the field, Tuchel seemed to not let go of his grip and intimated that Conte look him in the eyes. Pushing and shoving ensued, just as there had been between the two managers in the technical area during the match at Stamford Bridge. They were then shown red cards.

Conte celebrated Tottenham’s first equaliser, by Pierre-Emile Højbjerg in the 68th minute, by barging into the chest of Tuchel, sparking a melee among the two sets of coaching staff.

Then, after Reece James put Chelsea back in front in the 77th, Tuchel set off on a sprint past Conte and down the touchline, clenching his fist in pure delight.

Kane’s goal came in the sixth of seven added-on minutes, the striker glancing in a header that took a touch off the thigh of James before going into the net.

“I thought when we shake hands you looked in each other’s eyes, but Antonio had a different opinion,” Tuchel said of the post-match clash with Conte.

“He was happy when they equalised and it got a bit heated, but nothing big ... I think it was not necessary but a lot of things were not necessary.”

As for Conte, he didn’t want to talk about the confrontations that took place during and after the match despite being asked repeatedly in his post-game interviews.

Kalidou Koulibaly had put Chelsea ahead in the 19th minute by meeting a deep corner from Marc Cucurella with a stunning volley that flew high into the net for his first goal since joining in the off season from Napoli.

Tottenham, who only came to life after the introduction of Richarlison, ended a run of five straight losses to Chelsea in all competitions, but remained stuck on just one victory at Stamford Bridge since the Premier League started in 1992.

Both teams have four points from two games.