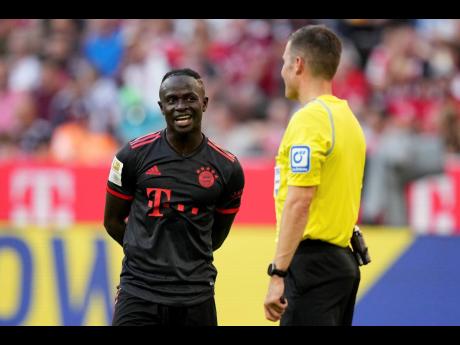 Mane thought he’d opened the scoring in the 19th minute and his celebrations were cut short again in the 75th after another lengthy VAR review.

Jamal Musiala and Thomas Müller’s first-half goals were enough to maintain Bayern’s winning start and frustrate former coach Niko Kovac on his return to Munich. Kovac, who led Bayern to a league and cup double in 2019, took over Wolfsburg in the offseason.

Kovac was fortunate his new team only lost by two goals yesterday.

Benjamin Pavard struck the crossbar and Mané’s goal was ruled out before Musiala finally made Bayern’s dominance pay in the 33rd minute. The 19-year-old Germany forward eluded two defenders before steadying himself to dispatch the ball inside the left post.

“We’re playing good football. It’s fun to be part of it,” said Musiala, who took his tally to three goals in two Bundesliga games.

Muller made it 2-0 in the 43rd when he deflected Joshua Kimmich’s effort past the helpless Koen Casteels in the Wolfsburg goal. Alphonso Davies had done well to race down the left before pulling it back for Kimmich.

Casteels did brilliantly to keep out a deflected effort from Leroy Sané early in the second half, before Bayern had two more goals – including Mane’s – ruled out for offside.

Bayern, the 10-time defending champions, started the season with a 6-1 rout of Eintracht Frankfurt last weekend.

Earlier yesterday, Mainz and Union Berlin cancelled each other out in a 0-0 draw in Mainz. Both teams stayed unbeaten after winning their opening games.

“It was definitely not too pretty to look at,” Union coach Urs Fischer said. “But from my point of view I’m satisfied. We’re happy to take the point home.”