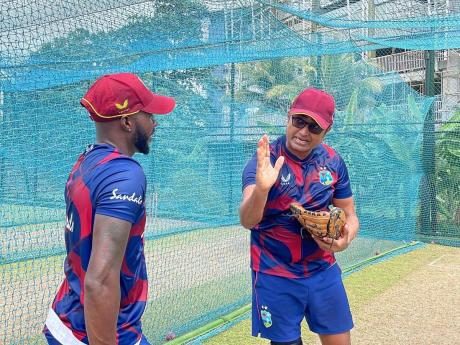 WEST INDIES Test vice-captain Jermaine Blackwood, despite an aggressive bent, has been used almost solely in the longest format by the regional side but always wanted a chance to turn out in the 50-over game for the men in maroon.

Blackwood, in his first interview since a recall following a seven-year absence, says his preparations were centred around the upcoming Caribbean Premier League season, where he’s expected to feature for the Guyana Amazon Warriors, but was ‘over the moon’ when he received news that he had been recalled to the ODI team.

The Test vice-captain played in the first game of the three-match CG United One-Day International (ODI) series against New Zealand last night at the Kensington Oval. The West Indies go again on Friday before playing the final game on Sunday.

“I was in Guyana preparing for the CPL and I got a call from the chairman of selectors (Desmond Haynes) that I got selected for the ODI team. I was over the moon. I was just telling myself that I always wanted to come back in the team to make a difference, and now with the opportunity, I just have to go out there and do just that,” said Blackwood.

“I’ve been watching the ODI team for a while now, my job will be to rotate the strike and bat for as long as possible,” he said.

The hard-hitting 30-year-old Blackwood last represented the West Indies in ODI’s back in 2015 when he played against Sri-Lanka in Pallekele. Despite the seven-year absence, Blackwood was quick to point out that his 50-over game has since developed.

“I haven’t played regional 50-over for the last three years due to West Indies duties, but in between that, I’ve scored some hundreds batting at the top of the order and also at number three. I have the experience to bat both the new ball, and the old ball in the middle as well,” said Blackwood.

Blackwood also made reference to current ODI vice-captain Shai Hope, whom he said shared a few pointers with him, including how the West Indies as a team wants to approach games.

“I think he’s sharing his knowledge and stuff with me, which is good. I haven’t played for the ODI team in a while and just to come back in the set-up now and have an experienced player like Shai Hope giving me some insight and little things that I need to do is very good,” said Blackwood.