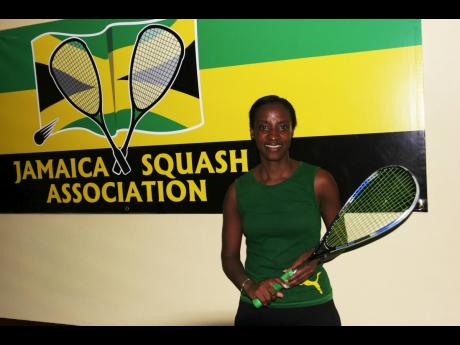 KAREN ANDERSON, president of the Jamaica Squash Association, has loved the game all her life and she’s confident that newcomers will fall in love with it when they attend the Senior Caribbean Championships, which begins on August 21 at the Liguanea Club in Kingston.

Speaking at the launch of the tournament on Tuesday, Anderson says the speed of play and the countervailing strategy will keep fans enthralled during the seven-day event.

Postponed because of the COVID-19 pandemic, the Championships was last held in Jamaica in 2007. Anderson believes it presents a chance to rev up its fan base.

“I want everybody to come and watch the tournament,” she said.

Asked about the sport’s appeal, she enumerated its virtues.

EASY TO GET HOOKED

According to the association president, it’s easy to get hooked on squash.

“You know, we find that once somebody comes, and they hit that ball for the first time, they all look out from the outside and say it’s easy, and they have to come out here and try to hit it, and they never can really master it, and so you always try to achieve the mastery of the game,” she explained.

Admission to the event is free.

“That’s one of the things that makes it so exciting, the speed which it goes at, the camradie that you have with the people around,” said Anderson.

Elected in May, Anderson, who served a three-year stint as general manager of Netball Jamaica, says her work there has greatly impacted her presidency and praised former Netball Jamaica president Marva Bernard.

“Huge impact. I learnt so much under Marva Bernard. She is, was, and continues to be a mentor for me, and I still reach out to her for advice and we piggyback and feed off each other when we have issues and I wouldn’t be where I am today if I wasn’t at Netball Jamaica,” said the former national player coach.