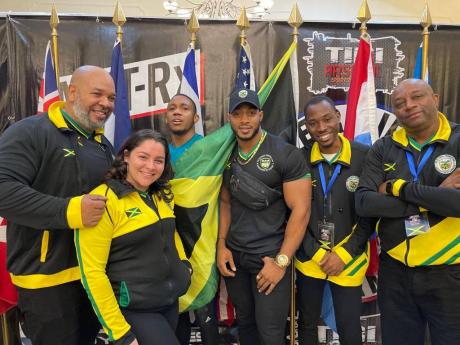 JAMAICA’S POWERLIFTING team, the Jamaica Spartans, were strong enough to lift gold medals in record-breaking style, on their international debut, at the NAPF Regional Championships in Panama City, Panama.

The Jamaica Spartans claimed their first-ever medal at an international competition by way of Scott Jennings, who not only mined gold, but also set a deadlift championships record of 312.5kg (688.94lb) in the 83kg weight class.

However, Jennings said he felt as if he could have done better.

“The accomplishment is bittersweet. Expected to do a lot better than I did but got the gold in the end,” Jennings said.

“Breaking the records was not a surprise (but) should have been more of them. I have plans to go up a weight class and dominate as best as I can there at 93kg.”

America’s Jonathan Losa and Williams Medrano of Costa Rica closed out the podium with 705kg totals.

Depass, who is now the first Jamaican woman to medal in the sport, broke the competition’s squat record, setting it at 185.5kg (408.96lb). She also broke the championship record for the deadlift with 220.5kg (486.12lb) and although she did not attempt the bench press record, Depass broke the total lift record by tallying 503.5kg (1,110.03lb) in total weights lifted.

Depass said she hopes her performance will inspire more women to join the sport.

“It feels like all my hard work has paid off and I look forward to continuing to improve,” she said.

“I would hope that my success would motivate more Jamaican women to compete. Competing is fun because of the people you meet and the connections you make with other lifters like you. It is an amazing opportunity just to be around other strong women.”

Jamaica’s final competitor at the event, Jevon Dacosta, who represented the island in the 93kg weight class, also finished the competition on top of the podium.

“The NPAJ is very happy with all it has achieved … We too as a sporting body are playing our part in the Jamaica 60 celebrations by giving our best performance on the international stage with Jamaica’s first gold medals at our first Powerlifting Championship,” Blair said.

He said the NPAJ hopes to achieve more in the sport but will need more support.

“The NPAJ has several plans in the pipeline to improve the sport islandwide, but funding is always an issue. The journey, so far, has not been easy, but we keep pushing forward, hoping that one day, the mindset regarding non-traditional sports will change,” he said.