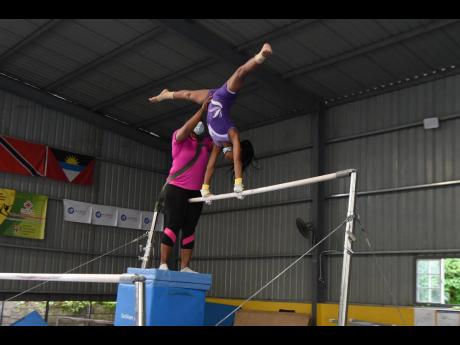 Kenyon Hemans
President of the Jamaica Gymnastics Association Nicole Grant-Brown assists Orchid Hall to do a handstand on the uneven bars during a practice section at the Jamaica School of Gymnastics.

JAMAICA SCHOOL of Gymnastics (JSG) topped the Yamilet Pena Classic held in Punta Cana, the Dominican Republic, from August 13-14, edging out the hosts to finish with the highest all-around score.

Twenty-nine JSG gymnasts competed at recreational compulsory levels, 1-4, and at the advance levels, 6-8.

Westmoreland Gymnastics, which also attended, competed with five gymnasts at recreational levels 1 and 2.

More than 14 countries participated, including Mexico, Aruba, Panama, and the United States, with 307 gymnasts from 19 clubs.

There were also a number of individual winners. Zuri Matandara-Clarke, for instance, was first on beam and bars with 9.1 and 9.35, respectively, and second all around with a score of 35.35 in the Level 8 competition.

In the Level 7 category, Leanna Blake captured the bars, scoring a 9.6, and was first all around.

In the Level 4 section, Leah-Paige Phillips took the bars with a 9.6, but ended fourth all-round with a score of 35.65.

Kamaria Smith was the top Jamaican performer in the evel 6 section. She was second on bars with 9.25 and sixth all around with 35.7.

Kalyssa Campbell was second on floor with a 9.4 at the recreational level but eighth all around with 37.0.

Jesanique Scott ended third on bars and seventh all around with a score of 35.7.

President of the Jamaica Gymnastics Association (JAGA), Nicole Grant-Brown, noted that it was the gym’s first international competition since 2019 because of COVID-19, but the young athletes showed that they have improved leaps and bounds despite being out of competition for so long.

“The club has grown, and we have used much of the time during the COVID-19 pandemic to train our coaches to be more vigilant when it comes to technique, physical and mental preparation of the gymnasts,” said Grant-Brown.

She said coaches Nadeen Whyte and Kerieon Grant are elated and even surprised that they topped the overall standings.

“All the girls went out and did the best they could, knowing they were competing internationally for the first time in two years as a club.

“They were up against more seasoned competitors, and this made them very nervous, but they gave their best, and for that we are superproud of them,” she said.

“We must also thank the parents who helped to fund this competition,as without their input, it would not have been possible.”