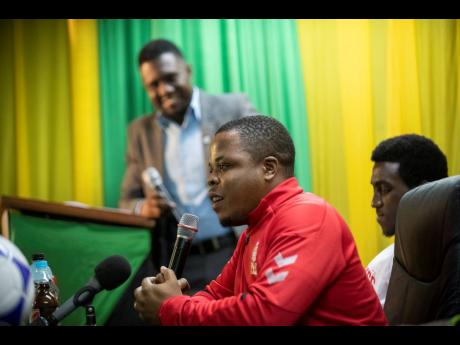 RECENTLY, SIX Jamaican coaches participated in a Concacaf A licence course, put on by the Trinidad and Tobago Football Association (TTFA), and head of coaching educaton at the Jamaica Football Federation (JFF), Andrew Peart, is aiming to advance local coaching to the level where his organisation can replicate the feat.

Peart, who was part of the delegation, praised the TTFA for the initiative, noting that regional coaches usually have to travel outside of the region to acquire that level of coaching certification.

However, with the twin-island republic looking to host another two courses in the next two years, Peart hopes more Jamaican coaches get the opportunity.

“There were six Jamaicans and people from Barbados, St Lucia, St Kitts and Nevis – right throughout the Caribbean. So it’s really a course for Caribbean coaches to become world-class.

“It’s expensive to travel for this course. So for the TTFA to put this on inside the Caribbean is tremendous.

“The TTFA’s plan is to have three (courses) in three years. So there will be chances for other coaches to get the upgrade.

“Hopefully, one day, Jamaica can reach the level where we can host our own, or in association with Concacaf or any other federations, so our local coaches can have better access to these A licence courses,” he told The Gleaner.

According to Peart, the 220-hour course was really thought provoking and eye-opening. The cohort, he said, will continue their education online until they have satisfied requirements.

“The face-to-face component is just one part of it. The course will continue until January, February. We will have online webinars and we will have individual course work that we must finish.

“So there is not really an end date. It’s about satisfying the criteria for certification. We could all finish January, February, but some could go longer,” he said.

“We had some coaches who had B licences, so this is a step up, and the response from our coaches was good. They are glad to have had the opportunity.

“The idea is to get more of our coaches up to world standard. We also expect the coach educators to come back and teach the other courses below the A Iicence.

“It is all about growth, and we have to continue to feed our local coaches as much as possible so we can get the standard of football and the standard of coaching up,” he said.

The course is consistent with similar content, contact hours, and learning outcomes of other A Licence courses in the CONCACAF and UEFA regions.