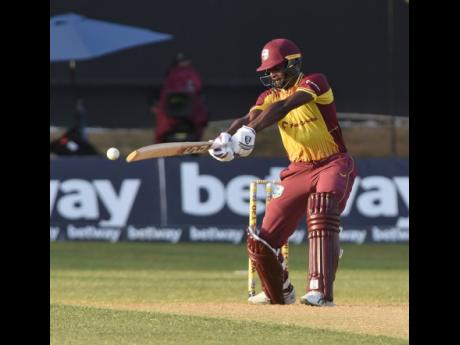 EXPERIENCED West Indies batsman Shamarh Brooks will be looking to carry over his recent rich run of form into the second One Day International (ODI) against the Kane Williamson-led New Zealand tourists when the teams meet in the second match in the series at Kensington Oval in Barbados today. The game is set to start at 1 p.m. (Jamaica time).

In the first ODI, which surprisingly was Brooks’ first at home, the classy stroke-maker led the West Indies with a Man-of the-Match 79 from 91 deliveries. Brooks in his post-game assessment revealed that teammate and former West Indies captain Jason Holder advised him, before the game, to ensure that the occasion was a ‘memorable’ one.

“It was my first ODI here in Barbados. I remember Jason Holder telling me to make it a memorable one, so that’s what I did, I’m just happy that we got over the line. We all know how important these three ODIs are for us going forward for the World Cup, so it was good to start with a win,” said Brooks.

Despite what eventually turned out to be the match-winning performance for the home team, Brooks admitted that the wicket wasn’t the easiest to bat on.

“We definitely had to apply ourselves out there. We said we wanted some partnerships, and that made a big difference as there were partnerships with Shai Hope and then captain Nicholas Pooran, and I guessed that proved vital in terms of breaking the back of the Kiwis,” Brooks added.

Entering the first ODI, the West Indies had nine straight defeats in the format, but according to Brooks, as a team he doesn’t believe the West Indies have changed their approach or should feel pressured despite the recent poor results.

“I don’t think we’ve been doing much different. We’ve been just looking to improve as a team as we go on. When we look at our last ODI series against India, we were getting 300 plus in back-to-back games and even though we lost the games, that’s good for a team like us who are now building a team for the World Cup next year,” he said.

The West Indies will be looking to take an unassailable lead in the series with victory in today’s match.

The last time the West Indies won an ODI series against a team ranked above them would be back in 2021 when they defeated Sri Lanka 3-0.