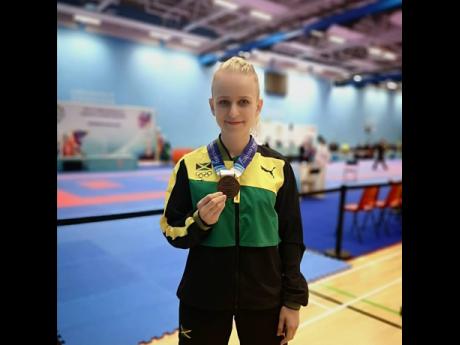 Ukraine-born Valentyna Zolotarova has captured Jamaica’s first ever women’s medal at a Commonwealth Karate Championships. Zolotarova claimed a bronze medal in the women’s under-55kg weight category at the championships held in Birmingham, England,...

Zolotarova claimed a bronze medal in the women’s under-55kg weight category at the championships held in Birmingham, England, September 7 and 8.

Zolotarova is satisfied with the bronze medal but said she wanted to bring home a gold medal for Jamaica.

“Jamaica deserves so much more,” she said, “ I will not stop working until Jamaican Karate is where it belongs on the international scene. We are making great strides, but our vision for the future is bigger. Much, much bigger.”

After winning her first match 2:0 against Sotia Zeniou of Cyprus, Zolotarova lost her semi-final match 1:0 to Robin Vincent of England. She would then enter the repechage to face off against Mesom Singhi of India for the bronze medal. Zolotarova won the match 1:0.

Jamaica’s lone competitor at the event said she got great support from other Caribbean teams. Coach Cameron King of Barbados stepped in to help coach her, and according to Zolotarova, he really helped to make a difference in her performance.

Zolotarova said she is grateful to the Jamaican Olympic Association and sponsor Graham Baldwin for supporting her participation in the Commonwealth Championships.

President of the Jamaica Karate Federation (JKF), Sei-Shihan Tony Robinson, said this is a proud moment for Jamaica and that Zolotarova deserves this success because she works hard.

“I am extremely proud of Valentyna because she has worked so hard. She was in the camp in Mexico, and I think it was three or four flights to reach Europe and (she) arrived and competed a day after she arrived. She is a mother of three, and in spite of that, she still trains so hard and achieves so much,” Robinson said.

He said her achievement will influence other Jamaican karate athletes to go after big things in other global competitions.

“I’m sure she is an inspiration to both males and females, especially females,” he said.

Zolotarova said having recently finished a post-graduate degree in international sport management, on a scholarship provided by the Commonwealth Games Federation, she is eager to work hard to continue to contribute to the overall development of karate locally.