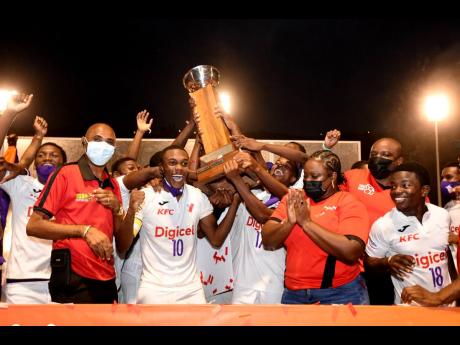 File
Members of Kingston College (KC) celebrate with the trophy after winning the Manning Cup title at the end of last season. KC will open today against archrivals Calabar. 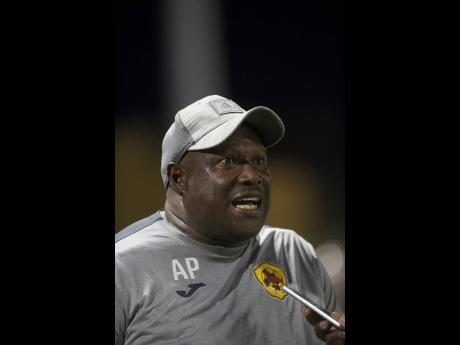 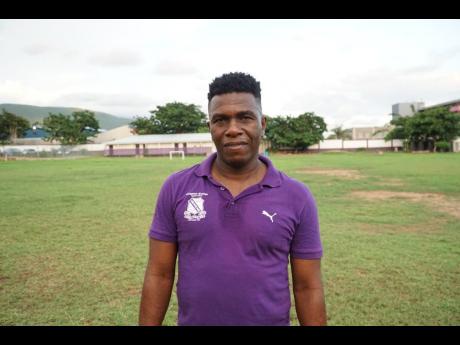 Sabina Park will be buzzing with excitement this afternoon as the Inter-Secondary Schools Sports Association (ISSA) Manning Cup and daCosta Cup schoolboy football competitions kick off today with a triple-header.

Matches will return to their usual home venues this year and fans will be allowed back inside the stadiums to watch their respective teams. Last year matches were played at specific venues sanctioned by organising body ISSA, which also banned fans from attending.

The regulations were put in place because of the COVID-19 pandemic, which also prevented the competitions from taking place in 2020 and this year makes the first time in two years that both will be contested in the customary formats.

The match between KC and Calabar is expected to be very competitive as both teams are evenly matched in all departments and they also play a similar brand of football.

The reigning champions, however, hold a slight edge after recording a come-from-behind 3-1 victory over Calabar in their last meeting in the David ‘Wagga’ Hunt Memorial recently.

Head coach of KC, Raymond ‘Stampy’ Watson, although confident of a victory, is expecting a pulsating contest.

“I am excitedly anticipating the kick-off because I really want the boys to go out there and show what they can do and so we are looking forward to this season opener,” said Watson.

“Anything between KC and Calabar is always competitive if it is even jacks or marble and this game is going to be no different.

“Both teams will be coming very hard at each other and so we have prepared mentally and physically for a tough game,” Watson said.

He added that KC have prepared well for this year’s championships and therefore they will be going all out for three points.

“It is important that we get three points from this game, but if we don’t, then it will not be the end of the road, because we can recoup and recover from thereon,” Watson stated.

KC will be led by the likes of Bujuan Richards, Tayshaun Mattis, Jahiem Johnson and Blaine Byam.

Watson’s opposite, Andrew Price, said he is aiming for a positive start to the season.

“We are positively optimistic. I know that my players are raring to go and we are happy that we are one of the teams that will open up the schoolboy season,” said Price.

“We are confident because we have a good group of players and we have young players.

He noted that Calabar have gotten over the 3-1 defeat to KC in their last encounter and they are looking forward to a good showing.

“Saturday (today) is where the real competition starts and I know both teams will be up for it because there is a lot of competitive rivalry between both schools, so both supporters and players are up for the game and so it should be an exciting match,” Price said.