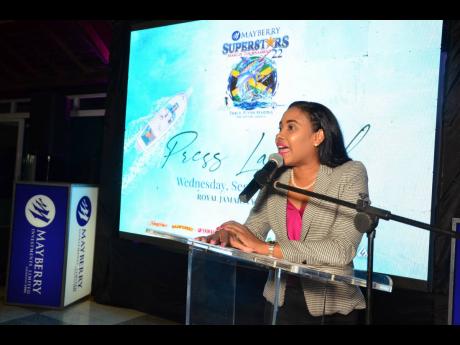 Contributed
Mayberry Investments Limited Vice President of Sales and Client Relations, Christine Benjamin, speaking at the launch of the Superstars of Port Antonio International Marlin Tournament 2022 on Wednesday at the Royal Jamaica Yacht Club in Kingston.

Mayberry Investments Limited (MIL) has once again displayed its commitment to the development of sports in Jamaica.

In alliance with Superstars of Port Antonio (SOPA), it has reignited the flames of the SOPA International Marlin Tournament 2022, which will commence on September 27 and will come to a halt on Saturday, October 1. Mayberry has thrown its ‘line out’ as title sponsor for the exciting tournament, at the launch event at the Royal Jamaica Yacht Club in Kingston on Wednesday.

Mayberry is anticipating another successful tournament set to take place at the Errol Flynn Marina located in Port Antonio, Portland.

Christine Benjamin, vice president of sales and client relations at Mayberry, spoke highly of the event, saying that Mayberry was elated to be back onboard the prestigious tournament.

“Our partnership is a commitment to sport and nation-building. Anglers have widely acknowledged the tournament as having the highest marlin catch rate per boat compared to any other event on the island. The prominence and value of this sporting event and the lives it impacts is tremendous. We are elated to be on the journey to grow sport fishing in Jamaica,” Benjamin said.

The people of Portland are set to benefit considerably from the staging of the event as they will get an opportunity to earn. Bobby Stewart, chief executive officer of the Port Antonio Superstars Blue Marlin Tournament, is happy to see the event back after the COVID-19 lockdowns.

“I am anticipating a rather good and exciting tournament and I’m looking forward to some marvellous catch. It will be great for the people of Portland. We should have three wonderful and gruelling days of friendly rivalry,” Stewart asserted.

The event will kick off with an opening ceremony at the Errol Flynn Marina on September 27. Anglers will be vying for the top prize of US$100,000 along with varied sectional prizes.