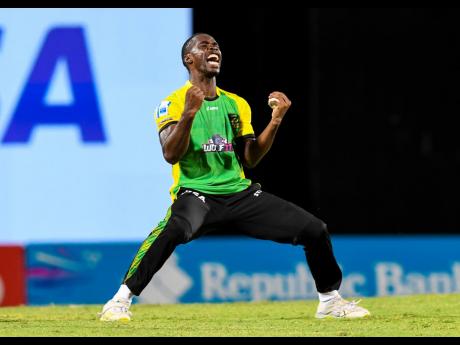 Randy Brooks - CPL T20
Nicholson Gordon of Jamaica Tallawahs celebrates the dismissal of Dwayne Bravo of St Kitts & Nevis Patriots during the Men’s 2022 Hero Caribbean Premier League cricket match at Warner Park Sporting Complex on August 31, 2022 in Basseterre, St Kitts and Nevis. Gordon is hoping he gets a chance to play in today’s reverse fixture against The Patriots.

THE JAMAICA Tallawahs will take on St Kitts and Nevis Patriots in match number 17 of the Hero Caribbean Premier League today at 9 a.m. Jamaica time in Port-of-Spain, Trinidad, and one player who is relishing the opportunity to parade his skills once again is Jamaican pacer Nicholson Gordon.

After playing all the matches in the 6ixty competition and then the first two games of the CPL for the Tallawahs, Gordon has had to watch as the team rattled up a record of three wins and two losses in five matches heading into the mid-phase of the competition.

In the two matches to date, the right-arm speedster has sent down eight overs and conceded 73 runs while taking four wickets, with the best bowling figures of three wickets for 32 against the team the Tallawahs face today, the Patriots.

A high economy rate of 9.12, coupled with the local and foreign player rotation policy, may have kept the Kensington Cricket Club player out of the line-up. However, the former West Indies Under-19 pacer understands the role of being a consummate team player.

“It is understandable, only 11 persons can play, so not being in the last two line-ups, I simply have to get myself ready mentally and physically for the coming games,” said Gordon.

Gordon made it clear that he is enjoying the surroundings of the Tallawahs set-up, with new coach Shivnarine Chanderpaul and bowling coach Curtly Ambrose creating a harmonious atmosphere.

One thing that the 30-year-old fast bowler would have loved is to play for the Tallawahs on home soil in Jamaica at Sabina Park. With the logistics of this year’s competition, that wish will not materialise, with St Kitts, St Lucia, Trinidad and Tobago and Guyana being the only host venues.

“Well, obviously we would want to play on the home grounds to get the support of our local fans, but we are all professionals, so we just have to adjust and play the best we can,” he said.

With the Patriots in the fourth position on four points lurking perilously close behind the second-placed Tallawahs by just two points, Gordon knows all too well that the team will have to revive their early form and try and separate themselves from the rest of the chasing pack.

“We just have to assess,” Gordon said. “We know where we came up short in the last game, so we have to just identify and execute in our next games.”