DaCosta hoping to stave off Nunes with I Am Fred 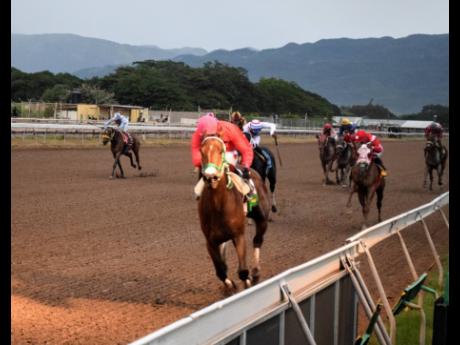 Anthony Minott/Freelance Writer
I AM FRED, ridden by Phillip Parchment, wins the 10th race over seven and a half furlongs at Caymanas Park on Saturday, December 4, 2021.

JASON DACOSTA’S in-form American, I AM FRED, appears a hot prospect to take out CALCULUS in Saturday’s Menudo Trophy after pulling off a giant-killing act, outfinishing speedy MAHOGANY at six furlongs in the None Such Trophy at six furlongs two weeks ago.

However, running 10lb heavier after being dragged by MAHOGANY into a time of 1:11.3, I AM FRED is bound to feel the effects of returning too quickly at 10 furlongs, only five pounds lighter than course-specialist CALCULUS.

A plucky foreigner, I AM FRED had also stunned with a 15-1 upset in June, beating CALCULUS into third at nine furlongs and 25 yards. That afternoon, CALCULUS fell prey to two light stablemates as BILLY WHIZZ set the fractions for I AM FRED to pounce.

DaCosta has thrown in another foreigner, super-light EAGLE ONE, who ran no race last Saturday when fancied at six furlongs, an event which his stablemate, SUPER DUPER, lost on the line.

Should he inexplicably reverse his form, EAGLE ONE is still no match for CALCULUS in a route race. His only assistance could be to help shore up his under-pressure trainer’s earnings as champion Anthony Nunes lurks $4 million off the stakes lead this weekend,

CALCULUS enjoyed a stroll around the park with 126lb, a day after I AM FRED’s battling victory, clocking 1:55.2 in sloppy conditions. Freshened in 1:15.3 for six furlongs last Sunday morning, CALCULUS should turn the tables on a battle-weary I AM FRED.

BIG JULE, another of CALCULUS’ old foes, reports with a never-off-the-bridle victory at nine furlongs and 25 yards under his girth. However, that win was against overnight-allowance rivals on July 16, trampling a weak field including out-of-form BEST DAUGHTER EVER, laid up for six months, plus third-place RAS EMANUEL, who hadn’t run a route race in his last 10 starts.

CALCULUS had beaten BIG JULE into fourth in last year’s Jamaica Derby and has since cemented himself as the top distance horse from that batch, holding his own in graded stakes this season among the best.