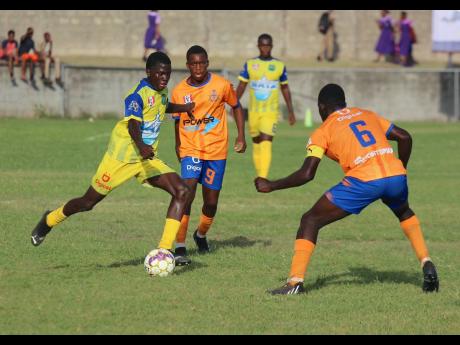 CLARENDON COLLEGE (CC) technical director Lenworth ‘Teacha’ Hyde says his team is beginning to show the discipline he has instilled, following a clinical 3-0 win over Lennon High in their Zone ‘H’ ISSA daCosta Cup Clarendon derby at Foga High School in the parish.

CC took the contest away from the shell-shocked Lennon side in the first half as goals from Keheim Dixon in the ninth minute and Justin Hayles in the 20th knocked the stuffing out of the Lennon team, who had their coach, Hugh Howell, watching the encounter from behind the fence.

Assistant coach Odain Brown declined to comment on Howell’s absence from the bench, however, his team looked nothing like the 2016 Ben Francis Cup champions for the duration of the contest.

CC would cap off a fine evening when Marques Reid made it 3-0 five minutes into the second half.

From the outset, CC showed their superiority with some enterprising fleet-footed play from the skilful Dixon, who rifled home a left-footed shot past Daniel Drummond in the Lennon goal to kickstart proceedings.

There was no doubt that Howell’s absence took a toll on the players as they seemed at sea about their defensive assignments. Hayles, for instance, was able to jump unmarked inside the box to nod home a corner to double the former champions’ lead.

For close to 15 minutes, CC possessed the football in their half as the Lennon players retreated in an attempt to limit damage.

Tired legs began to show on the Lennon players in the second half, which allowed the diminutive Reid to latch on to a right-sided long ball, outpace his marker and slot past the goalkeeper to make it 3-0.

Lennon’s Radkeane Chambers showed glimpses with a few telling dribbles, but the day belonged to CC, who moved to six points from two games.

“I am pleased with how we possessed and dominated the ball in this game. The downside is that we could have scored some more goals, and I want to see us playing more attacking going forward,” said Hyde.

Brown lamented that his team were never in the contest, and it can only get better moving forward.

“It was just one of those days. It’s a young crop of players, and we just need to go back to the drawing board, and we should get better and better as the days go by.”