King hundred in vain as Tallawahs slump to defeat 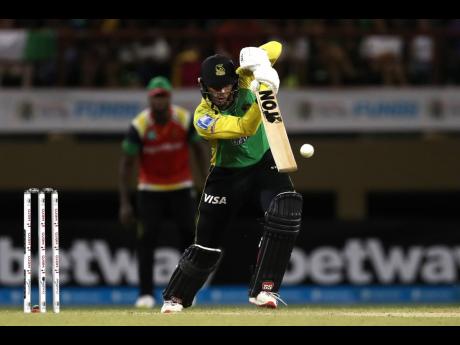 CPL T20/Getty
Jamaica Tallawahs’ Brandon King strokes the ball to the offside during his innings of 104 in the Caribbean Premier League (CPL) match against Guyana Amazon Warriors at Providence Stadium in Georgetown, Guyana on Wednesday night.

Chasing a competitive 179 at the Guyana National Stadium late Wednesday, Tallawahs got 104 off 66 deliveries from opener King, but no other batsman passed 15, leaving the innings short of real momentum.

Tallawahs required 20 from the final over, but King was one of three wickets to perish as their run chase fizzled out for 166 with a ball to spare, resulting in a damaging fifth defeat which left them third in the standings on eight points.

For their part, the success was important for Amazon Warriors, handing them their second win in seven games, to move to five points. They need to win their remaining three games to guarantee themselves of a play-off spot.

Asked to bat first, they owed their total of 178 for eight off their 20 overs to Shai Hope’s 60 off 45 balls, but equally to Odean Smith’s stunning 16-ball 42 at number eight.

The right-handed Hope, punching at number three, struck four fours and three sixes in an attractive knock, but when he missed a pull at Afghan off-spinner Mohammad Nabi (3-12) and was bowled in the 16th over, Amazon Warriors were stalling at 97 for six.

Crucially, he put on 74 for the eighth wicket with Keemo Paul, who lashed two fours and two sixes in a 12-ball, unbeaten 22.

In reply, South African leg-spinner Imran Tahir (two for 17) struck twice as Tallawahs crawled to 58 for three in the 10th over, before King dominated a 54-run, fourth-wicket stand with Raymon Reifer (six) to repair the damage.

All told, King counted eight fours and seven sixes, gathering his first 50 off 38 balls before completing triple figures off another 26 deliveries.

He lacked support, however, and his dismissal – run out off the third delivery of the final over, attempting a desperate second run – sealed his side’s demise.