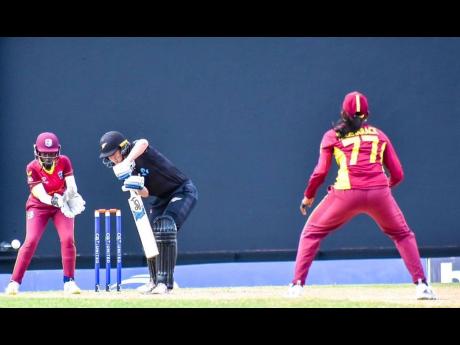 CWI Media photo
New Zealand’s Maddy Green (centre) on the go during her Player of the Match performance against the West Indies in Antigua and Barbuda yesterday. Green made 48 in New Zealand’s two-wicket win.

The West Indies Women once again failed to put enough runs on the board to seriously challenge their New Zealand counterparts as the visitors secured a two-wicket win in the second One-Day International (ODI) at the Sir Vivian Richards Stadium to secure the series with one game still to play.

After getting to 169 for nine in their allotted 50 overs, the Windies Women managed to pick up eight New Zealand wickets, however, the visitors would eventually get to 171 for eight in 40.1 overs.

After deciding to take first strike, the home side found the going tough, with Jamaican opener Natasha McLean failing to spark after getting just four runs.

The hosts would then lose two wickets, with the score on 29, as Shabika Gajnabi and Jamaican Rashada Williams made seven and 13, respectively.

First, Taylor went caught behind for 10 off a painstaking 39 balls before Kyshona Knight fell one run later for one at 68 for five in the 25th over.

It was left up to Matthews and another Jamaican, Chinelle Henry, to get the regional side’s score to some respectability, which they did with aplomb.

The pair added 47 runs for the sixth wicket before Matthews, on 46, became the first of three wickets for Eden Carson.

Matthews had faced 82 balls and hit just two fours. Henry, however, continued her hot streak with the bat as she hit five boundaries in her knock of 30 from 35 balls before she fell to Carson.

Some lower-order resistance from Afy Fletcher, 19, and Shakera Selman, 18, helped the West Indies to 169 for nine.

The visitors rushed to 22 before the hosts were able to get among the wicket’s column. It was seamer Selman who struck twice when she sent back captain Sophie Devine for seven in the fifth over and then had Suzie Bates caught by McLean for 16 at 32 for two.

When Henry picked up the wicket of Amelia Kerr for 21, at 51 for three, the home side had their tails up and were looking to make further inroads.

Maddy Green and Lauren Down had other ideas as they took the score past the 100-mark following a 66-run fourth-wicket partnership.

Down went on to make 33 while Green fell two runs short of a well-deserved half-century before Brooke Halliday scored 24 to push the visitors closer to the target.

A couple of quick wickets by spinner Karishma Ramharack kept the match interesting, however, it was a little too late as the New Zealanders romped home with 59 balls to spare.

Ramharack finished with three wickets for 22 runs in a losing cause, and head coach Courtney Walsh once again lamented the disappointing display with the bat, which cost the team.

“We didn’t bat as well as we know we can. We didn’t put enough runs on the board, but some positives are that the bowlers were a lot better today, but we are still not as consistent as I would like for us to be,” Walsh said.