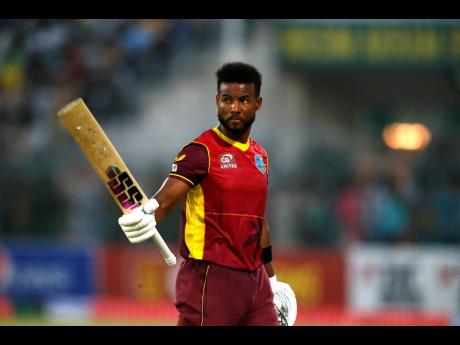 Tasked with overhauling 195 after du Plessis had plundered 103 from 59 balls, Amazon Warriors pulled off a six-wicket win over St Lucia Kings, reaching their target with four balls remaining at the Guyana National Stadium.

Hope top-scored with 59 not out off 30 balls while Afghan opener Rahmanullah Gurbaz chimed in with 52 off 26 deliveries and captain Shimron Hetmyer, 36 off 28 balls, helping Amazon Warriors to a crucial third win which took them off the bottom of the standings.

The game was in the balance at the start of the 17th over with the hosts still requiring 40 from 24 balls but Hope changed the tone of the chase by dispatching fast bowler Roshon Primus for three successive sixes, the right-armer’s only over leaking 20 runs.

He cleared the ropes at extra cover with the third delivery, swung the next ball – a high full toss – over midwicket before dispatching the fifth delivery – a low full toss – high over backward square.

With the required run rate plummeting to nearly 6.5 runs per over, Hope then combined with Romario Shepherd (10 not out) to guide Amazon Warriors safely home in an unbroken, 47-run fifth-wicket stand.

“[It was about] self-belief. Regardless of what score they put on the board, we had to make sure we can chase it so we had to stick to our plans, stick to what you know you can do and the runs would come off,” said Hope, who punched two fours and five sixes in the stylish knock.

“It’s just about doing what the team requires.”

Amazon Warriors have now won two on the bounce, lifting them to seven points with two of their 10 games remaining. They are one spot and two points outside the play-offs.

Kings remained second on eight points despite the defeat, and will be anxious to win their final game to ensure their top four spot.

South African du Plessis had earlier flaunted his brilliance, striking 10 fours and half-dozen sixes at the top of the order to propel Kings to 194 for five off their 20 overs.

Opting to bat, Kings lost Mark Deyal without scoring to the fifth ball of the innings with a single run on the board but du Plessis put on 132 for the second wicket with Sri Lankan Niroshan Dickwella (36) to repair the damage.

The right-hander completed his first fifty off 29 balls and triple figures off another 30 balls, before perishing in the 18th over.

Roston Chase (17 not out) and Roshon Primus (11 not out) then carried the innings to its close in an unbroken 34-run sixth-wicket partnership.

Facing a required run rate of nearly 10 an over, Amazon Warriors were given a flying start by the right-handed Rahmanullah who lashed seven fours and two sixes in an 81-run opening stand off 43 balls with left-hander Chandrapaul Hemrah (29).

Off-spinner Deyal struck twice in the ninth over as Amazon Warriors lost three wickets for four runs in the space of eight deliveries but Hetmyer, who belted two fours and a six, joined Hope in a 63-run fourth-wicket stand to deny Kings.