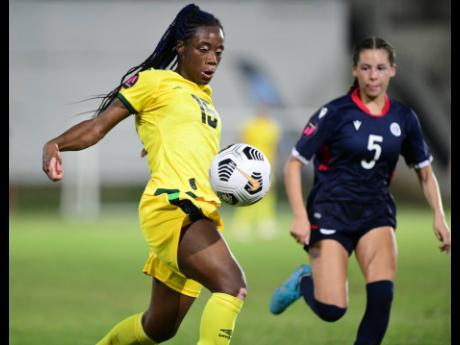 On the back of a campaign which saw her being named the best women’s player in Hungary, national midfielder Tiffany Cameron has credited her blistering form to her continued evolution as a player and meeting the challenge of leadership required,...

On the back of a campaign which saw her being named the best women’s player in Hungary, national midfielder Tiffany Cameron has credited her blistering form to her continued evolution as a player and meeting the challenge of leadership required, which she hopes will be the avenue for a return to the Women’s World Cup next summer.

Cameron was named 2021-22 Hungarian Women’s Player of the Year after a campaign which saw her score 17 goals and register seven assists in 23 games for ETO FC Gyor. Her performance helped them to a second-place finish in the regular season although missing out on the title to her old club Ferencvaros where she spent the previous season winning a league and cup double.

In capturing the highest individual football honour in the country, Cameron said that accepting the responsibility of delivering initially as the only foreign player on the team, pushed her to deliver when it matters most.

“When I came to ETO FC Gyor I was the only foreigner for the first half of the season, so that came with greater responsibility and accountability on my part. ETO have a lot of very talented young players, but my experience helped add to the team’s success and was the real difference maker,” Cameron told The Gleaner. “When I was at Ferencvaros if I were to have a poor performance one game it wouldn’t be as noticeable on the team because they had so many other foreigners with top quality to make up for that. In ETO I couldn’t afford to have a bad game otherwise my team would struggle.”

With Cameron’s impact, ETO Gyor did not have to imagine a situation where they would struggle. Cameron reflected that being more tactically sound in her position and demanding more of herself in challenging situations have led her to be in what she calls the best form she has been in during her career.

“I think the difference maker was me showing up for my team in big games when we knew it would be difficult to get points. It had me digging deeper in those moments and being more tactically disciplined,” Cameron said. “It’s the best form I’ve been in, in my career because I am in tune with my mind and body. As I’ve gotten older I’ve realised what works for me and what doesn’t which gives me more confidence to stand up for the things I need in order to maintain top form.”

That form from last year has continued in this season with six goals and three assists in five games which has also earned her a return to the national senior team after being left off the Concacaf Women’s Championship team that qualified for the Women’s World Cup in July. Having proven herself last season, Cameron said continuing her stellar form is critical to ensuring that back-to-back World Cup appearances will be in her future with a fiercer talent poll than in 2019. It’s important I show that it doesn’t matter where I play, I will be an offensive threat. I think I’ve proven that in the past year especially. Numbers don’t lie. If I can maintain good form at my club and do well whenever I’m called up to represent Jamaica, I have a good chance of making the plane next year to the World Cup,” Cameron said.