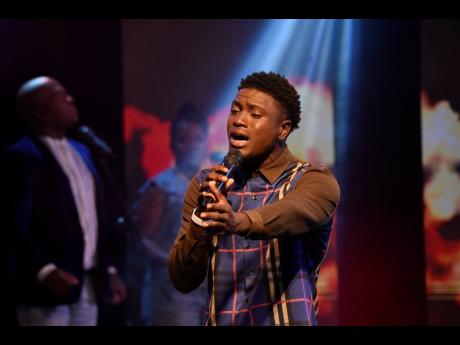 The Camperdown High School Manning Cup team is backing 17-year-old footballer and singer, Mozein Sutherland, to win the Digicel Rising Stars (DRS) competition as he is among the top three contestants.

With the football team not performing as well as they had hoped for this season, head coach Donovan Lofters said they are still supporting Sutherland as he pursues his dream while they work on improving the team’s Manning Cup performances.

“We have buckets up on buckets, up on buckets!” Lofters said of the money they have been collecting in containers to assist Sutherland in his bid to lift the title. “We are trying to ensure that Mozein is the winner not only by talent but by voting also. We knew Mozein was a singer when he came to the school because he is always singing, so we are happy for him and we are here to cheer him on.”

Sutherland is an attacking midfielder on his high school team, but his coach said he thinks his singing is better than his football.

“His singing is far better than his football,” Lofters said. “If his football skills were as good as his singing, then he would have been as good as Lionel Messi or Cristiano Ronaldo, that’s how well he can sing.”

Still, Lofters is not counting out the youngster’s football talent as he said he is playing a crucial role in the Camperdown team as they look to make it out of the group stages.

“He is one of our creators, he is hardworking in attacking midfield and he has a good vision,” his coach said.

Despite having to juggle football training and the DRS competition, Lofters said Sutherland is well focused in training.

“After football training then he goes to singing classes. His athletic ability helps him with his singing,” he said.

Although he is doing both now, one day Sutherland will have to choose between a singing career and a career in football. Coach Lofters said he would support him if he chose singing instead of football.

“It is easier to have a singing career than a football career and I will definitely support his singing career,” Lofters said. “Laa Lee was one of my players too, he used to DJ in the camp and now he’s a professional artiste. So I just encourage him to do what he (Mozein) loves. He definitely loves singing more than football.”