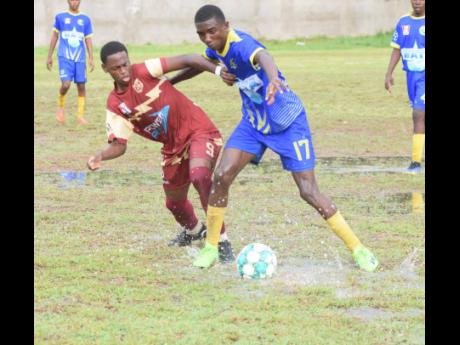 All 20 matches scheduled have been brought forward to 1 p.m., from the regular 3:30 p.m., due to the threat of a tropical depression in the Caribbean Sea. The island is expected to be affected by rain from the depression late today. Both teams in the feature game are on six points from two games but William Knibb have a superior goal difference and are yet to concede a goal.

Coach of Cedric Titus, Wade Crawford, said he hoping they can come away with the advantage in what he anticipates will be a close contest.

“It is always a hard fight between us, so I am expecting a humdinger. It’s going to be a tight game, maybe it’s just one goal that will separate us. Hopefully, we can get that goal or even more for the win,” Crawford said.

Dwight Jeremiah, coach of William Knibb High, said he is hoping they can take all three points and create an early separation in the zone.

“It’s a top-of-the-table clash and the winners could separate themselves from the rest of the teams. We know it’s going to be a tough one but our aim is for the three points,” said Jeremiah.

Hat-trick hero from the midweek fixtures, Amari-Christopher Reid, who helped William Knibb to an 8-0 victory over Muschett High, said he is looking to carry the momentum into tomorrow’s game.

“I don’t usually score a lot of goals and those were my first daCosta goals. It’s a very exciting feeling so I want to score even more,” Reid said.

“My target is to score around 15 goals now after this hat trick. We are putting in the work and just have to stay focused because we want to do much better than last year,” he added.

Coach Jeremiah is hoping Reid can bring his confidence into tomorrow’s game.

“The past two seasons he played at left-back but was always an attacking player. I am happy to see him now getting some goals because he is our ball carrier and has the freedom to roam. He was deserving of the hat trick, so his confidence must be through the roof and if he is confident Amari can be a real game changer, so I’m looking forward to him having another good game against Cedric Titus,” Jeremiah said.