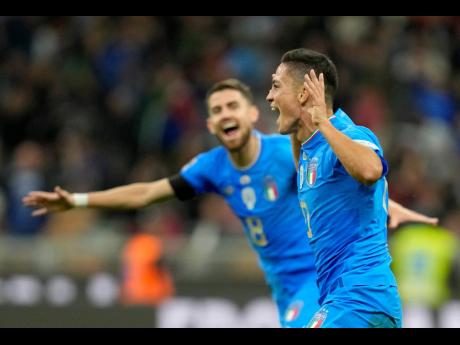 It was a rough Friday night for two teams expected to be World Cup contenders. England lost at Italy 1-0 and were relegated from the top tier of the Nations League, and Germany lost at home to Hungary by the same score.

Italy, who didn’t qualify for the World Cup in Qatar, went ahead at the San Siro when Giacomo Raspadori controlled a ball over the top from Leonardo Bonucci and scored from the edge of the area in between several England defenders.

Italy full back Federico Dimarco also hit the post in the rematch of last season’s European Championship final which was won by the Azzurri.

The goal of the night belonged to Hungary captain Ádám Szalai, who scored with an audacious backheel flick 17 minutes in following a corner.

Germany captain Thomas Müller, who was marking Szalai, didn’t appear to take into account that Szalai was going to attempt a shot on goal with his back to the net from a sharp angle but the ball sailed over the head of goalkeeper Marc-André ter Stegen and inside the far post.

On Monday, Italy visit Hungary and England host Germany in the final round of group matches. The group winners book a spot at the finals in June.

Bosnia and Herzegovina were promoted to League A following a 1-0 win over regional rival Montenegro, with Ermedin Demirović scoring in first-half added time after being set up by Edin Džeko.

Unbeaten Georgia secured promotion from League C with a 2-0 win over visiting North Macedonia following an own goal from Bojan Miovski and another from Napoli winger Khvicha Kvaratskhelia, who has five goals and five assists in eight Nations League matches.

Estonia was promoted from League D after beating Malta 2-1.

Brazil beat Ghana 3-0 in France with two goals from Richarlison and an opener from Marquinhos.

The United States put on a dismal performance in a 2-0 loss to Japan in Düsseldorf, Germany.

Daichi Kamada scored following Weston McKennie’s giveaway in the 24th minute, and Kaoru Mitoma added a goal in the 88th. In their next-to-last World Cup warm-up, the Americans failed to put a single shot on goal.

Japan are preparing to play in their seventh straight World Cup.

Also, Qatar-bound Cameroon was beaten by Uzbekistan 2-0, and South Korea, who have also qualified for the World Cup, drew with Costa Rica 2-2.

Iran – in a World Cup group with England, the United States and Wales – beat Uruguay 1-0.