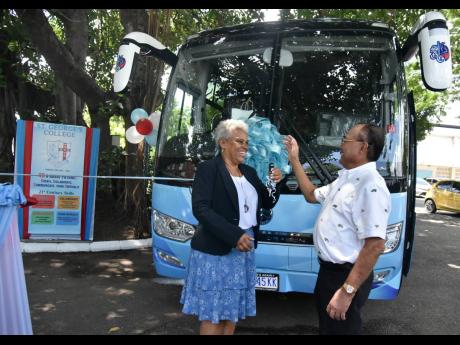 Kenyon Hemans
St George’s College principal Margaret Campbell, is overjoyed after receiving the keys to two new buses valued at more than $25 million from Phillip Wong, a member of the St George’s College Old Boys Association on Thursday, September 22. The buses were handed over to the principal during a small ceremony held on the school grounds.

The school now has new a luxury 32-seater and a smaller 16-seater minivan, which will be used to transport much smaller groups

Wong, of the class of 1952, revealed he came from very humble beginnings and that the famed North Street institution gave him the foundation and inspiration to pursue his ambitions and that he enjoys giving back to the school for the role it played in his development.

“St George’s really impacted my life in many ways. I am from a poor Mavis Bank family and I went to college because the examples here prompted me to really do it.

“Though I couldn’t afford it, some how I did it and I got through and now I am giving back,” he told The Gleaner.

The pair of units cost more than $25 million and Wong, who also donated a ‘Welcome to Excellence’ sign at the school’s entrance, said during his time at high school he always saw vehicles being donated by custodians of the school and the Jesuits and that inspired him to assist the school with transportation this time around.

“St George’s was the base for all that I did in the future. Hopefully, this will set an example for others to give back also. I do it because I want to and the more I give is the more I get,” he commented.

School principal Margaret Campbell noted that their teams and societies have expanded over the years and that having two buses virtually eliminated their transportation needs.

“We need to be transported to events and so this is of tremendous benefit. We are happy Mr Wong answered the call and generously donated not one but two buses.

“The small one will be used for smaller groups, to conserve gas and all of that and we will have the bigger one for large teams,” she pointed out.

School head boy and Manning Cup captain, Joel Brown, was also impressed with their new buses and thanked Wong for his kindness.

“This gesture is a big step-up. We are glad to have an old boy donating such a tremendous gift.

“The buses are real nice. More people are getting involved in sports and other activities and I am really thankful on behalf of every student at St George’s,” Brown said.

Earlier this week, the school’s Manning Cup team received a $2-million donation from Mayberry Investments Limited, whose Chairman Christopher Berry is also an old boy who prides himself on giving back to his alma mater.

The group has long supported the school’s athletic programmes and the support to the Manning Cup team is just one initiative the company has supported, and Campbell pointed how important it is that every school has people who contribute to and support them, no matter how small.

“Schools cannot do it by themselves or survive on what Government gives us. We want an environment where students can excel and we need the support of all stakeholders.

“People like Mr Wong who give back so generously are absolutely critical for schools to excel,” she stated.