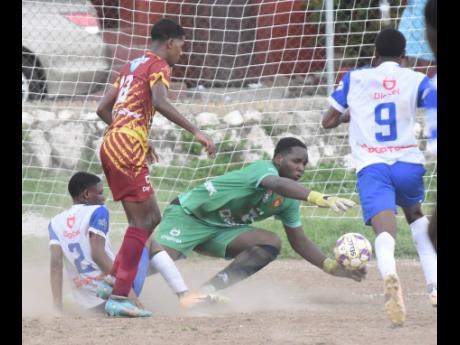 Ian Allen
Wolmer’s Boys goalkeeper Roan Melford (second right) dives to complete a save ahead of Taevaughn Rennie (right) of Hydel High School during yesterday’s ISSA/Digicel Manning Cup match at Wolmer’s. Others in the photograph are Rasheem Green (left) of Hydel and Antwan Henry (second left) of Wolmer’s. Wolmer’s won 1-0.

Thanks to the first-half heroics of Wolmer’s Boys goalkeeper (GK) Roan Melford, the Jerome Waite-coached outfit remains undefeated in Group E of the ISSA/Digicel Manning Cup.

Wolmer’s edged Hydel 1-0 in their encounter yesterday at the Wolmer’s Boys’ playing field courtesy of a 58th-minute free kick from Jahmani Bell, which soared into the top corner.

Despite having a man-advantage for 25 minutes after Hydel’s Kialand Smith 65th-minute red card, Wolmer’s were unable to add more to their tally. Though a man down, Hydel managed to put Wolmer’s under pressure for the latter stages of the game despite a lack of cutting in the final third.

It could all have been different had Hydel converted a fifth-minute penalty. However, Waite said that Melford denying Gabriel Sebourne from the spot was the fuel for Wolmer’s to press on from what could have been the worst possible start.

“The goalkeeper kept us in the game. He came up big and made the save and that really made the difference,” Waite said after the game. Melford’s penalty save preserved his fourth straight shutout as well as extending Wolmer’s winning streak to four games.

While not surprised at how fast his team has started so far, Waite has been especially pleased with how well his team has defended during the campaign while acknowledging their limitations in attack.

“It’s the work that you put in that you will achieve. This team is not a goalscoring machine. But at the same time, they have defended well which is good. And the plus about the defence is our goalkeeper. He continues to keep clean sheets.” Waite said.

Hydel High head coach Devon Anderson said that failing to capitalise on their early penalty opportunity made their away trek that more difficult,

“When you are away and you get a penalty so early in the game and you fail to put it away, you end up with your back against the wall,” Anderson said. “It was an uphill task for us to play away and we only have ourselves to blame in situations like this.”

Additionally, Anderson said that the sending-off with the game still delicately poised only increased the difficulties for the team.

“It’s very difficult at times to actually predict what will happen out there in the game. We were under a bit of pressure, missed penalty chance, and a rash decision from him (Sebourne). It just put us behind and on the back foot,” Anderson said.

Wolmer’s remain in second place with 12 points as Mona maintained their Group E lead thanks to a 9-1 drubbing of Papine High.