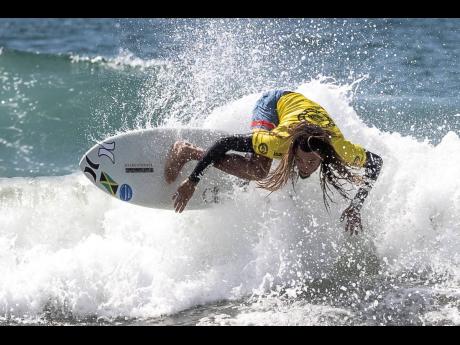 THE JAMAICA surfing team adopted the mantra ‘Nothing to prove, everything to improve’, as they ended the World Surfing Games (WSG) with a new international ranking.

After finishing in 38th place at the WSG in El Salvador last year, the team managed to jump three places at this year’s event which was held in Huntington Beach, California, USA.

Elishama Beckford, who was the standout surfer at the games, was second in heat 30 and was eliminated in his third round of the competition after rattling up 144 points to the team’s effort, a feat which was pleasing to Jamaica Surfing Association (JSA) President Inilek Wilmot.

“We were pleased with the surfers’ performance despite things not going exactly as we hoped due to the unpredictability of the waves. Once again, Elishama Beckford was able to secure some solid scores and that indicates to us that the level that he is surfing at is definitely up there,” said Wilmot.

After competing in both the Pan American Surfing Championships and the World Surfing Games, the JSA will now turn its attention to the fifth and final instalment of the National Open Series in December.

The association is also fine-tuning its plans to introduce a couple of local junior events to give young surfers added competition ahead of a packed calendar next season.