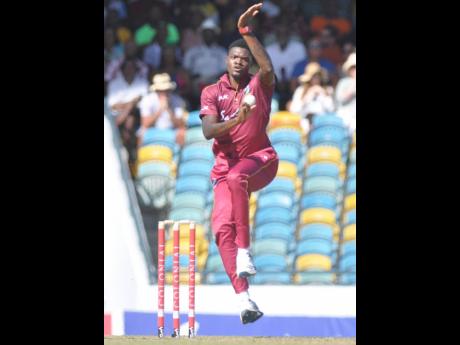 FIVE WEST Indians were picked when a total of 314 players went under the hammer in the inaugural South Africa T20 League (SA20) auction, bringing to nine the number of Caribbean cricketers chosen for the January-February 2023 tournament.

Antiguan fast bowler Alzarri Joseph was the most expensive buy of the five, sold to Johannesburg Super Kings for R2.1 million (US$118,353). The franchise had signed all-rounder Romario Shepherd before Monday’s auction here.

Jamaican all-rounder Odean Smith was the only West Indian acquired by MI Cape Town. He went for R1.7 million (US$95,810) in the auction.

Barbadian pacer Ramon Simmonds was acquired at a price of R175,000 (US$9,862) and will join Vincentian left-arm fast bowler Obed McCoy, who was selected before the auction, at the Paarl Royals.

There will be no West Indians turning out for the Pretoria Capitals or Sunrisers Eastern Cape.

Each of the six franchises, owned by Indian Premier League (IPL) team owners, was allowed to sign a maximum of five players – three international, one South African national, and one uncapped local player – in a pre-auction draft.

Overall, they could sign seven overseas players and 10 South Africans in their 17-man squads, but only four foreign players are allowed in the Playing XI.

The SA20 League is only the second major T20 franchise tournament, after the IPL, to hold an auction system for player signings.

The tournament will see franchises play each other twice, followed by two semifinals and the final. There will be a total of 33 matches.