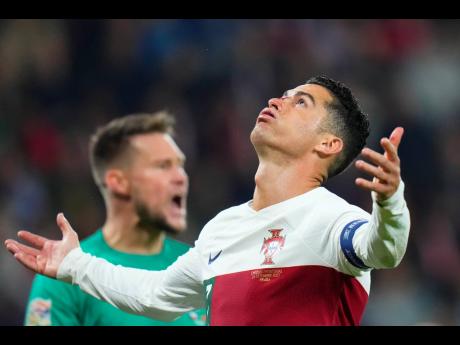 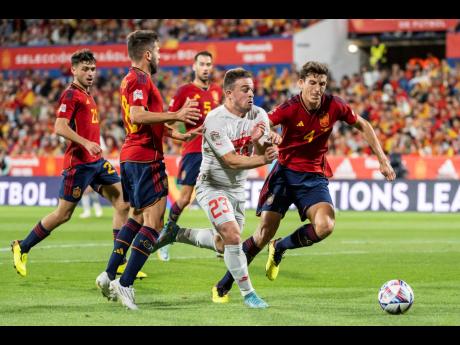 DIOGO DALOT helped Portugal take control of their Nations League group by scoring his first two international goals in a 4-0 rout of the Czech Republic yesterday.

Spain blew their lead of Group A2 after flopping in a 2-1 loss to Switzerland in front of their disappointed fans in Zaragoza.

Portugal moved two points ahead of Spain before the neighbours meet in Braga on Tuesday in a winner-take-all clash to see who advance to the tournament’s final four next June.

While his Portugal rolled in Prague, Cristiano Ronaldo had a rough night, first enduring a nasty blow to his face that made his nose bleed and required a small bandage. International soccer’s all-time leading scorer with 117 goals also committed a penalty that, fortunately for him, the Czechs failed to convert with the score 2-0.

Dalot put Portugal ahead in the 33rd minute when the right back scored from a pass by Rafael Leão.

Bruno Fernandes doubled the lead in first-half injury time moments before Ronaldo was guilty of the handball inside his own area. But Patrik Schick wasted the penalty kick by sending it on to the crossbar.

Dalot put the result beyond all doubt in the 52nd with a curling shot into the corner.

Ronaldo finished with an assist for Diogo Jota to take a fourth goal in the 82nd.

Luis Enrique, who last year guided Spain to the semifinals of the European Championship and the final of the Nations League, is known for making unpopular decisions and sticking to them.

And, once again, he surprised by starting Marco Asensio, who has been relegated to a substitute role at club Real Madrid, as a false nine while leaving pure strikers Álvaro Morata and newcomer Borja Iglesias on the bench.

Akanji struck with a great header in the 21st when he outjumped his marker and drove the ball off the turf and into the top corner of the net.

Asensio finally managed to pick apart Switzerland’s defence in the 55th when he dribbled past four players before laying off for Jordi Alba to rifle in the equaliser.

But Switzerland hit right back three minutes later when Akanji was left unchecked at the near post to use one touch to redirect a corner kick into the six-yard box where Breel Embolo nudged it over the line.

“They said that it was easy to beat Switzerland and we have seen that is not true in the least,” Luis Enrique said. “They stopped us from playing our game, and you have to add to that our very sloppy first half. We improved in the second half, showed more precision, but just when we scored, we conceded another goal from a corner. Now we have to go to Portugal and win.”

Switzerland host the Czech Republic in St Gallen on Tuesday to decide who avoid relegation. Switzerland have two more points than the Czechs in last place.

Portugal, Spain and Switzerland will all play in the World Cup in November.