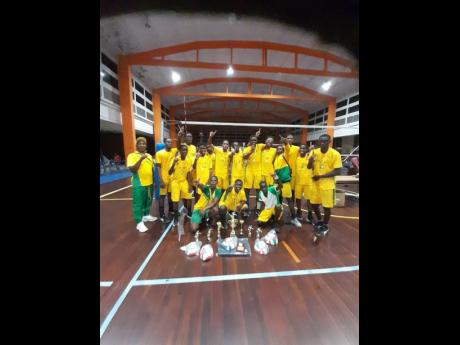 ST JAGO High School have consistently been a conqueror in volleyball and their long-serving coach Byron Martin has observed a correlation between athletic performance and academic excellence in the team. Martin believes one feeds the other.

A classroom veteran, Martin exhorts his students, whether they are volleyballers or not, to pay attention to their books and he feels it pulls them to the game.

“They know I will push them; they tend to come out and at the same time, I realise that once the students are academically strong, the mental ability for them is good.”

Recently retired after teaching the sciences at St Jago for the past 32 years, Martin said: “There’s a camaraderie with the group of students. They help each other and the other students in the school will see that, and they gravitate towards it because St Jago students always want to do well academically. So that is a pulling force for a number of students.”

As proof of his theory, the 2022 team has several academic highflyers. Five of them passed eight or more Caribbean Secondary Education Certificate (CSEC) subjects with that group amassing 23 distinctions.

The mix seems to work. St Jago won the ISSA Boys’ National title in April and the girls, perennial runners-up to Wolmer’s, took the title in 2016. Along the way, Martin’s squads have furnished Jamaica with fine players, including national standout Rick Webb.

With the continued help of fellow St Jago Spanish teacher Majorie Quesada, a Cuban who used to play for Venus Volleyball Club, Martin is rebuilding the St Jago boys’ team for 2023.

“About four of the persons we lost this year and the ones we are having right now, they are new to volleyball,” he said.

“We still have two very good players, Peter Grant and Lovelet Blake, but we have all of the girls still. The girls’ team is a stronger team this year,” the coach concluded.

Blake is one of the 2022 team’s highflyers with 7 CSEC distinctions.