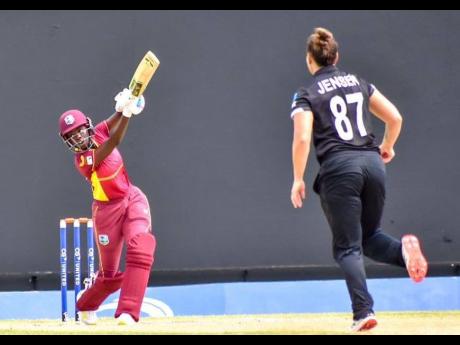 When legendary West Indies Women’s player Deandra Dottin surprisingly announced her retirement from international cricket last month, many felt that the regional side would have a huge void to fill with regard to the proliferation of runs that the...

When legendary West Indies Women’s player Deandra Dottin surprisingly announced her retirement from international cricket last month, many felt that the regional side would have a huge void to fill with regard to the proliferation of runs that the Barbadian had contributed over her 14 years of service.

As they say, life must go on, and one player who is embracing that concept is Jamaican Rashada Williams, who has been entrusted with one of the opening positions for the West Indies in Dottin’s absence.

In the just-concluded One-Day International (ODI) series against New Zealand, Williams opened in two of the three matches and scored 46 runs with a top score of 19 at an average of 15.33

Surely those numbers aren’t anything like what Dottin used to produce, but the 25-year-old Williams has been working on her game and hopes to one day cement her place on the team.

“Deandra Dottin is one of the greatest in the world now and those are big shoes to fill. For me, it is all about believing in myself and having that confidence and backing my abilities. Once I keep scoring runs, I will definitely be in the eleven and continue opening,” said Williams.

The right-hander has been involved regularly in the set-up since head coach Courtney Walsh took over the team two years ago, and Williams is keen on repaying the faith shown in her, by putting in the work.

“It feels extremely good to be here representing the region, my country, family and friends. Right now, it is really about confidence and believing in myself and backing my skills.”

Since her debut against Pakistan last year, Williams has played 19 ODIs while scoring 278 runs with a top score of 78 not out against South Africa in Antigua and Barbuda.

Despite not featuring in a T20 international for the regional side, Williams is keen to tick that box with the upcoming series and is working hard to tailor her game to suit that style of cricket.

“I have been doing a lot of work back home with the batting coach on trying to be aggressive when needed. As long as the ball is in my zone, I should back myself and try to rotate the strike by finding the gaps.”