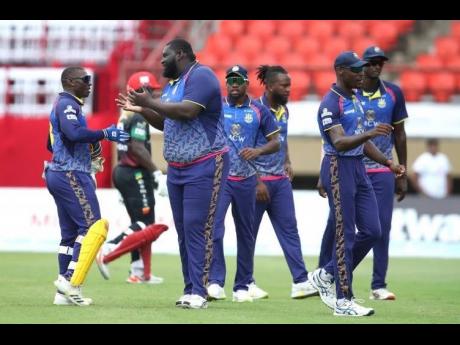 Guyana Amazon Warriors won the toss and chose to field, but Barbados Royals would go on to score the joint-highest total of this season by reaching an imposing 195 for five. Opener Rahkeem Cornwall starred in the innings, launching 11 sixes in his innings of 91, while Azam Khan supported with his own half-century.

The Warriors’ hopes of a successful chase were derailed in the powerplay, as they lost four wickets, with Kyle Mayers and Ramon Simmonds proving effective with the ball. Despite the attempts of Shimron Hetmyer, it was not to be enough as the Warriors fell to 108 all out.

Barbados Royals had initially got off to a cautious start, but Cornwall would go on to play one of the most destructive innings seen this season, 91 runs from just 54 balls, to put the Royals into the ascendancy. After losing his wicket just nine runs short of a century to the bowling of Shakib Al Hasan, the responsibility of the innings fell on Khan, whose vital half-century would help his side to to what was a winning total.

Guyana Amazon Warriors lost early wickets in their chase, in-form batter Rahmanullah Gurbaz departing in the first over, before a flurry of wickets fell that left the Warriors on 36-4 by the end of the powerplay. Simmonds excelled with his bowling, taking three key wickets, including that of captain Hetmyer, who was the Warriors’ highest scorer in the innings. In the end, the Warriors finished on 108 all out and will play in tomorrow night’s qualifier.