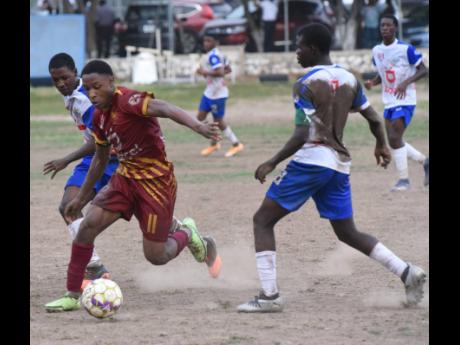 TWENTY-FOUR hours later than scheduled, two coaches with familiar ties will hope to take sole control of Group E as Wolmer’s Boys’ School face leaders Mona High this afternoon at 3:10 in the second game of an ISSA/Digicel Manning Cup doubleheader at Stadium East.

The encounter, which was slated for yesterday, was pushed back because of the severe weather conditions associated with Hurricane Ivan that disrupted Schoolboy football fixtures on Saturday and Monday.

Both teams have winning records to start their seasons and are tied on 12 points, although Mona lead the group because of their overwhelming +26 goal difference, with the most goals scored in the competitions so far (30).

It is a matchup that Mona head coach Craig Butler is relishing, especially against Wolmer’s head coach Jerome Waite, knowing the impact that Waite had in helping to coach his sons, national winger Leon Bailey and Kyle Butler as young players.

“We are always happy to play against Jerome, it’s always fun playing against Jerome. He was a part of our coaching team from way back when from Leon, Kyle, and all of them used to train together with Arnett Gardens,” Butler said.

“From Mona’s perspective we want always to be doing our best but at the same time, honouring our opponents. And that is what we will do with Wolmer’s.”

Wolmer’s will have the Phoenix connection as Jahmani Bell will be one of the attacking threats seeking to cause problems for Mona.

Mona have been difficult for opponents to stop so far this season with Papine, their latest victims, succumbing to a 9-1 defeat on Friday.

It is the third time this season that Mona have scored nine goals against an opponent. Only Hydel managed to limit them to three in their second game of the season.

What has been encouraging, however, for Waite and Wolmer’s has been their defence which has yet to concede a goal, despite offensively not ascending to the highs of their opponents.

Waite’s focus has been on proper recovery to face a Mona outfit who he knows will have the experience to give his team multiple problems.

Wolmer’s have only scored seven goals so far in their four wins.

Meanwhile, the first game of the doubleheader will see Camperdown High face Hydel High at 1:00 p.m. Hydel lost to Wolmers 1-0 on Friday while Camperdown finally got their first win of the season, beating Kingston High 7-0.