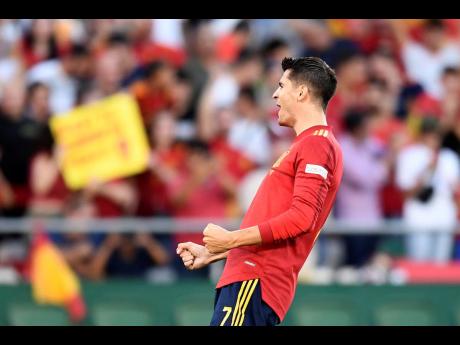 LUIS ENRIQUE was ready for the criticism to start pouring out back home. He knew another setback so close to the World Cup would raise questions about his team and his work.

Then a late goal changed it all, and it was all joy and praise for La Roja heading into soccer’s showcase event.

Spain scored an 88th-minute goal to end their winless streak against Portugal yesterday and advance in the Nations League to complete the final-four lineup.

“The questions in soccer will always be a consequence of the results,” Spain coach Luis Enrique said.

“If we had lost in the 85th, then it would be said that everything was a disaster. Now it’s all different.”

The late goal by Álvaro Morata secured a 1-0 victory that allowed Spain to overtake Portugal in Group A2 and join Croatia, Italy and the Netherlands in the finals to be played in June next year in the Netherlands.

“It’s wonderful be be back in the final four,” Luis Enrique said. “Victory is the best antidote for any depression or sadness.”

Portugal had a late chance to earn the point they needed but Cristiano Ronaldo missed from close range to see his scoreless streak with the national team reach three matches.

Spain needed a victory to return to the final four after losing last year’s final to France. Portugal won the competition’s inaugural edition at home in 2019 but haven’t made it past the group stage since then.

Spain struggled to create chances until Dani Carvajal found Nico Williams inside the area and the young Athletic Bilbao forward headed the ball back across the box for an easy strike by Morata into the open net.

FOUGHT UNTIL THE END

“Nico, in only his second game with the national team, was key after the pass from Carvajal, and I just had to push the ball into the goal,” Morata said. “We fought until the end.”

Spain had been in control of the group until losing 2-1 to Switzerland at home last weekend, while Portugal took over first place with a 4-0 win over the Czech Republic.

Spain hadn’t been able to win in Portugal in nearly two decades, since a friendly in 2003. They got their first competitive away victory against Portugal since a 2-1 World Cup qualifying triumph in 1934.

The Iberian neighbours had drawn their last four matches including friendlies. Spain’s last triumph against Portugal had come in a penalty shootout in the semifinals of the 2012 European Championship.

Spain also needed a last-day victory to make it to the final four last year, shocking Germany 6-0 at home.

Luis Enrique made seven changes to the starting lineup after the home loss to Switzerland, with Barcelona players Sergio Busquets, Gavi Páez and Pedri González among those relegated to the bench.

Switzerland, coming off consecutive victories over Portugal and Spain, defeated the Czech Republic 2-1 at home to avoid relegation to League B.

In League B action, Norway needed a home draw against Serbia to win their group, but lost 2-0 with Aleksandar Mitrović outdoing Erling Haaland. Mitrović scored in the second half after Dusan Vlahović had opened the scoring before halftime.

Sweden, coming off four straight losses, was demoted after being held to a 1-1 draw at home against Slovenia.

Scotland won their group by holding Ukraine to a 0-0 draw, while Ireland stayed in the second tier with a 3-2 win over Armenia.