Qatar tests out massive bus fleet ahead of World Cup 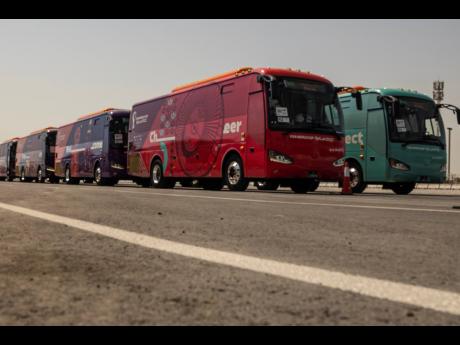 AP photo
Buses are seen during a test run of a massive bus fleet ahead of the Qatar World Cup, in Doha, Qatar, yesterday.

QATAR HAS tested out a massive fleet of buses ahead of next month’s World Cup, when an estimated 1.2 million football fans will descend on the small Gulf nation, an official said yesterday.

Thani Al Zarraa, who is overseeing transport preparations, said some 4,000 buses will be used during the month-long tournament, which begins November 20. That includes 3,000 buses acquired for the World Cup on top of a pre-existing fleet of around 1,000, he said.

Of the new buses, around 700 will be electric, he told The Associated Press. Fans can also use Qatar’s Metro rail system.

The bus fleet will shuttle passengers between main transport hubs and the eight stadiums where the matches will be held. Authorities held tests over the weekend involving some 1,800 buses without passengers.

Transport will be free for holders of the Hayya card issued by the government, which is required for entry to stadiums. An accompanying App has a feature in which fans can plan their journeys.

All visitors to Qatar, even those not planning to attend the matches, will need a Hayya card to enter the country from November 1 to January 23. Cardholders will also be able to enter the United Arab Emirates and Oman.

This will be the first World Cup hosted by an Arab or Muslim nation. Qatar, a small emirate in the Persian Gulf, is among the wealthiest countries on earth thanks to its massive natural gas reserves.