Camperdown, Hydel miss out after stalemate 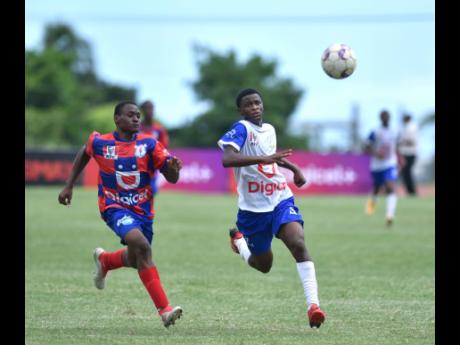 DONOVAN LOFTERS, head coach of three-time Manning Cup champions Camperdown, believes his team have only themselves to blame after they failed to convert numerous chances in their Group E Manning Cup encounter against Hydel High at Stadium East on Wednesday.

“To create so many chances and not score more than once is definitely frustrating, and this has been our Achilles heel from the start of the season. Against Papine, we created 25 chances and converted one. But the suspensions are over and we will be back to full strength. This Friday, we will be up against Wolmer’s Boys’, so hopefully we can turn it around and start winning games,” said Lofters.

Despite the one-all draw which has left Camperdown down the pecking order, in fourth spot on five points, Lofters remains optimistic, still believing he can finish in the top two.

“I’m thinking about that second spot. Everybody will have to play me again, so I’m not thinking about a third spot. If I beat those guys [Wolmer’s, Hydel and Mona], I will finish second,” said Lofters.

Camperdown, who chased the greater part of the game, went behind as early as the sixth minute, courtesy of some sloppy defending.

Hydel’s in-form striker, Keyanni Jackson, was quick to pounce on the error to rifle home his fifth goal of the 2022 Manning Cup season.

Camperdown, who grew slowly into the game, had their first real threat on goal in the 29th minute as Devonte McCrea’s effort went close to the near post.

The miss would become a trend for Camperdown, with Rajay Gray’s acrobatic shot early in the second half only managing to disturb Hydel goalkeeper Daveigh Payton’s upright.

With six minutes remaining in the encounter, Jardel Williams provided a moment of magic as the Hydel defence was finally breached after sustained pressure.

Following the draw, first-time head coach of Hydel, Devon Anderson, said the inexperience of the team means he will have to be patient as he seeks to build a sustainable programme.

“Those players out there have never played Manning Cup football in their lives. So, this is an experience for them. The good thing about it is that, out of the 22 players on our squad, a total of 18 of them will be able to return next season, so it’s a building process for us.

“This year is more of an experience where they have an idea of what Manning Cup is and what they need to do in order to perform at the highest level,” said Anderson.

Hydel continue to sit in third place in Group E on seven points, while Camperdown remains in fourth on five.