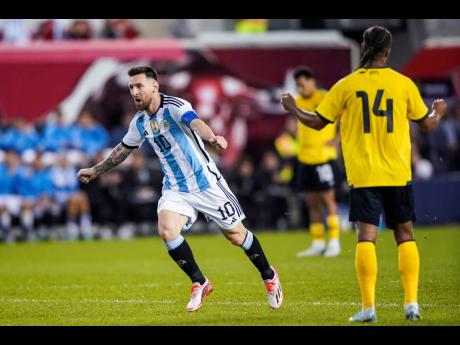 AP
Argentina’s player Lionel Messi celebrates his goal during the second half of an international friendly football match against Jamaica on Tuesday, September 27, 2022, in Harrison, New Jersey.

While not happy with the scoreline in a 3-0 loss to Argentina at the Red Bull Arena on Tuesday, Reggae Boyz head coach, Heimir Hallgrimsson, believes his charges played well and looks forward to more time to work with what he thinks are many positives.

“I thought we did a lot of good things and what you would ask for as a performance, especially against an opponent like Argentina.

“We kept them away from goalscoring chances until the 80th minute,” said Hallgrimsson, speaking about the moment Lionel Messi came on to the field and the Jamaican goal became undefendable.

Before that, Argentina led 1-0 through a 13th-minute goal from Julian Alvarez but Messi quickly went to work, notching a brace in the 86th and 89th minutes of play.

But Hallgrimsson does foresee challenges. Challenges, the coach believes, he needs time to rectify.

“Going forward, especially in the attacking third, we need to connect a little bit better. We wasted some good chances to create, to get crosses in, etcetera. That is understandable when you play for the first time with the two-striker system. They haven’t trained together but we will fix that,” said Hallgrimsson.

With president of the Jamaica Football Federation, Michael Ricketts, having announced a friendly against Cameroon next month just ahead of the November World Cup, Hallgrimsson is looking for a chance to take the time needed to do what is wanted.

“We have to continue to build on what we have seen here. It was a very short camp and I hope we can have more time.”

According to Hallgrimsson, what is taken from the game will have a lot to do with how the team moves forward.

“Overall, I think we can learn a lot from this game. We can show them [the players] a lot of positives and we can also show them a lot of negatives,” said Hallgrimsson.

Looking forward to the Cameroon friendly, Hallgrimsson said he hopes to have all the players he wants available and have the kind of time he needs to work on the various plans.

“I hope to have the strongest squad for that game. Cameroon is in their final preparation for the World Cup and will have their strongest team against us. Hopefully, we can have the best team that we can select.”