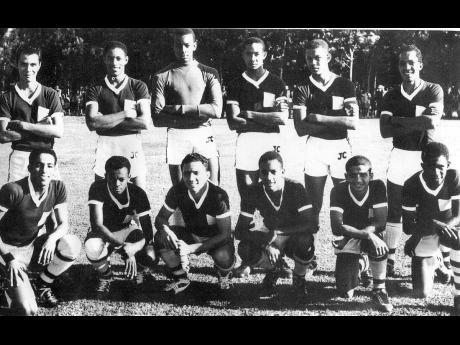 IF JAMAICA College (JC) wins the Manning Cup and Olivier Shield high school football competitions this year, the school will relive the accomplishment of its undefeated 1962 squad. For Norman McDonald, the left back on the 1962 team, the double...

IF JAMAICA College (JC) wins the Manning Cup and Olivier Shield high school football competitions this year, the school will relive the accomplishment of its undefeated 1962 squad.

For Norman McDonald, the left back on the 1962 team, the double was special. “All of us were little boys at the time and, all of a sudden, you’re thrust into the limelight of the Manning Cup which was a big, big deal. Olivier Shield was a big, big deal,” he recalled.

The 1962 squad was well prepared by English coach Deryck Tomkinson.

“He would give you the statistics on the opposing team, how many corners they conceded on the left, how much on the right. He would tell you how many throws-in they get, and he would go through each player you were supposed to play against and give you some tips on them,” McDonald reported.

JC beat Wolmer’s Boys’ School 4-1 and St Jago 1-0 but went a goal behind against Kingston College.

“Patrick Cooke, the captain, called us into the centre and he said, ‘let me tell you guys, this is no big deal. We’re going to win this match’ and we started to deal some serious ball and we won the match,” he said of the game that ended 3-1 to JC.

McDonald and his teammates drew 0-0 with Excelsior, and outscored Calabar 4-2 before facing a St George’s College team they had battered 5-0 in a practice game. “When we went to the Stadium, they gave us hell, I mean, living hell. It was one of the most harrowing experiences I’ve ever had,” said McDonald, still chastened from the rematch 60 years ago.

With the competition played on a round-robin basis, JC triumphed with speedy Peter Morgan and Egerton Webb scoring three times each. McDonald has fond memories of them both. The pint-sized Webb was brilliant at crossing the ball. “When he kicked with his left foot, he had that left foot there, it came right back to the penalty spot,” McDonald said.

With the Manning Cup secured, attention turned to the Olivier Shield, the symbol of nationwide football supremacy.

The two-leg final featured a personal duel for JC left back McDonald as his cousin, Leighton Carey, was the right winger for daCosta Cup victors Munro College.

In front of 18,000 fans at the National Stadium, goals from Warrick Lyn, Morgan and Webb gave JC the edge in a 3-2 thriller with Carey scoring for Munro. “The game was a great game,” McDonald remarked.

The return leg at Munro ended 0-0 but, with time running out, Munro had a goal disallowed for offside and fans stormed the field, assaulting referee Freddie Green.

The result completed the double. McDonald, a slim and quick defender with good timing, doesn’t remember the second leg.

JC has now won the Manning Cup 30 times and McDonald is pleased that tradition has been maintained. “I am very proud, very proud that they continued it,” he said.

Then he added a word of praise for those who organise schoolboy football, “It’s something to celebrate, and sport transcends all the other divisions in the country.”