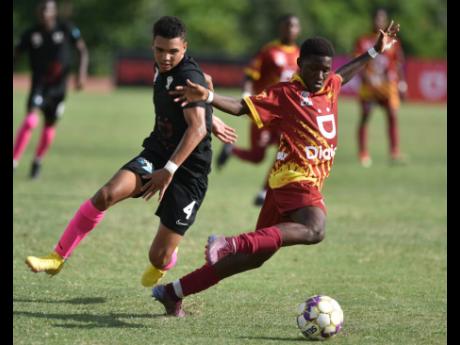 Despite his team’s impressive start to the season, which has seen them scoring five wins from as many games while netting 33 goals and conceding just five, coach Craig Butler refused to consider his team one of the title favourites.

“What is important is seeing the players reach a professional level, make good money, support their families and motivating other youngsters.

“So, after Manning Cup, what happens is what is important. We just want to set a good example so more kids want to go to Mona High, so more kids can believe in themselves and we can rise to the top.

“But I am pleased with the victory and the whole team. They were excellent. The formation and system we play created the opporuinities and, at the end, we did what we needed to do,” he said.

Mona started strongly and had the Wolmer’s defence under early pressure, and it was no surprise when Zhaine Pinnock fired Butler’s team in front after five minutes.

However, Wolmer’s slowly came into their own and had a number of good oppirtunities to level the score but failed to capitalise.

Mona, on the other hand, remained dangerous and only Roan Melford in goal kept them from widening their advantage.

However, Melford had no answer for Romarion Thomas’ scorching 35-yard effort that flew into the roof of the net.

Kishaine Gordon should have made it 3-0 for Mona in the 68th minute but he put his effort wide from six yards.

Mona would eventually create daylight when they were awarded a penalty in the 80th minute and Donhue Mitchell converted to put the game out of reach.

Although Wolmer’s pulled a goal back through Dejaun Green moments later and had some bright moments afterwards, Mona held on for what was a comfortable victory.

Wolmer’s coach Jerome Waite said his opponents wanted it more on the day.

“Mona wanted it more based on how they applied themselves in the first 15 minutes, and that resulted in the early goal.

“But Wolmer’s need to come alive and start thinking about how well they can play from the start and as the game progresses,” said Waite.