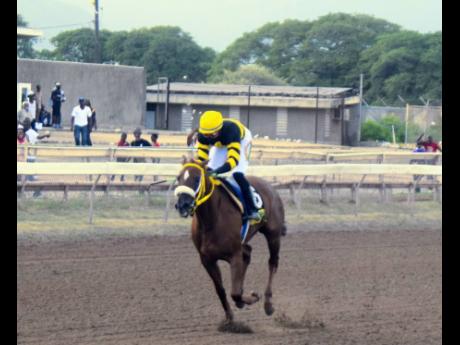 Anthony Minott/Freelance Photographer
ATOMICA, ridden by Dane Dawkins, runs away to win the 102nd running of the Jamaica Derby by nine and a quarter lengths over 12 furlongs at Caymanas Park on Saturday, August 6.

AN INTRIGUING clash of speedsters – Jamaica Derby-winner ATOMICA versus four-year-old SHE’S MY DESTINY – should have punters on the edge of their seats from the word go in Saturday’s I’msatisfied Trophy at six furlongs.

Though it’s a big 12-horse field, the likelihood of the pace collapsing appears slim due to the class of the fillies. Renowned run-on sprinter DUKE is too heavy at 126lb to capitalise, should the speed collapse.

SHE’S MY DESTINY’s stablemate, United States-bred LURE OF LUCY, has good speed and could turn stalker, making her capable of mowing down the top two, should they really outdo themselves on the lead.

ATOMICA needs no introduction, having turned the tables on BLUE VINYL in the derby after suffering her first loss in the St Leger at 10 furlongs. Wired to run, the Nuclear Wayne-Honkeytonkville chestnut controlled the derby from start to finish, outclassing the colts by eight lengths.

However, since embarking on her classic campaign on April 2 with an easy victory in the seven-furlong Thornbird Stakes, her third win on the trot, ATOMICA has not contested a sprint, which she now bows into against an older filly who doesn’t mess around.

Similar to last week Tuesday when he needed a jockey with ‘Urgency’ as his middle name to partner SILENT MISSION, leading trainer Jason DaCosta has summoned his late father’s former stable rider, six-time champion Omar Walker, who has been aboard SHE’S MY DESTINY at exercise, familiarising himself with the speedster, who does tend to be a bit wayward at the start of her races.

Though she’s a winner of six races from 10 starts, SHE’S MY DESTINY doesn’t have the star-studded classic campaign that ATOMICA boasts, having started her career late as a three-year-old, debuting last May with consecutive victories before going lame at the back end of June.

Six months after finishing lame in fourth behind ONE DON, HOIST THE MAST and ELITIST at seven and a half furlongs, SHE’S MY DESTINY won back-to-back races in fantastic times, 1:17.2 and 1:25.1, at six and a half and seven furlongs, respectively.

When SHE’S MY DESTINY clocked 1:25.1 mid-January, ATOMICA had already won her second race, a day earlier, getting her three-year-old career off to a great start. Her third race, three months later, was at seven furlongs, which she won in 1:27.0.

After that win, the distances ATOMICA competed at got progressively longer, ending with her victory in the 12-furlong derby being her last start on August 6. On the other hand, SHE’S MY DESTINY, returning off a four-month break, pulled off a striking victory on a heavy track, clocking 1:06.0 for five and a half furlongs, the second meet after the surface was resanded.

Having tested grade-one company on last, matching strides with JORDON REIGN’s at a mile before weakening off the turn, but still second a furlong out, SHE’S MY DESTINY has been drilled at exercise since whereas Gary Subratie seems contented with ATOMICA’s half-mile in 47.4 with leading rider Dane Dawkins.

Both fillies tend to be finicky at the start. However, it wouldn’t be advisable for either to blink because the race will be won at the off.