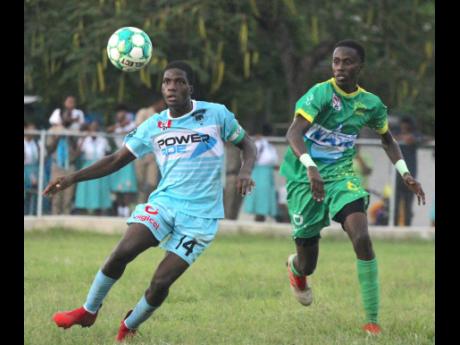 Old Harbour High kept pace with the leaders in Zone M of the ISSA daCosta Cup, following a 3-2 win over Denbigh High in their rescheduled encounter in Clarendon on Thursday.

Under gloomy skies at Denbigh, the hosts seized the early initiative on the heavy grassy turf and took the lead in the 11th minute when Alexander Dixon saw his long-range side-footed effort fly past Kristoff Johnson in the Old Harbour goal.

As Whyte continuously barked instructions from the sidelines, Old Harbour woke up from their slumber and got the equaliser in the 23rd minute through their talismanic mid-field maestro Shyjah Orridge.

Things would get even better for the visitors, as, five minutes before the break, Deshany Morgan dribbled past his marker and fired home to silence the home fans.

As the rains came down, the slick surface started to affect the passing ability of the teams, and so long balls were the order of the day for the remainder of the contest.

One of those long balls and a subsequent cross benefited Denbigh, as Shamar Watson finished off a spectacular volley inside the area in the 52nd minute.

With both teams going for the winner, it was Old Harbour who would get the luck of the draw, as, in minute 75, a defensive foul-up inside Denbigh’s area saw defender Devor Wynter slamming a clearance against his own teammate Antoney Brown, which saw the ball fly past Jovian Reid in goal.

Old Harbour would hold on to secure the crucial away win, which was pleasing to coach Whyte.

“Despite the poor conditions, the guys stuck to the task, and any points is a plus in this group, which is a very tough group,” said Whyte.

Losing coach Garfield Carney lamented poor finishing in what was a tough contest.

“Despite the result, we have to give the kids credit for how they stood up and fought. It is just unfortunate that we didn’t put away the number of chances that we got.”