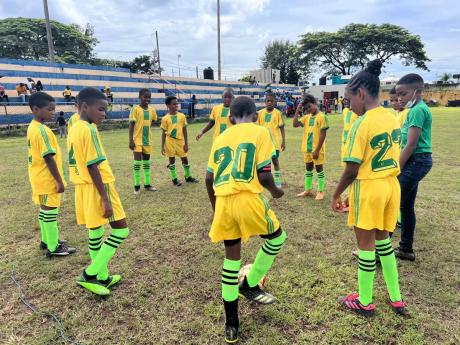 Contributed
Belair Preparatory players get ready for day one of the Junior Cup competition at the Constant Spring Football field yesterday.

IF DAY one of the 2022 Under-11 Junior Cup, hosted by the Free Your Image (FYI) Consultancy Group, is to be considered a litmus test for the age-group tournament, then, come October 15 when the tournament reaches its business end, the action should be sumptuous.

On the opening day of the urban leg of the competition, Emmanuel Christian Academy, were among the early pacesetters, capping off proceedings undefeated.

According to Gregory Jones, head coach of Emmanuel Christian Academy, his 1-nil victory over rivals Pembroke Hall Primary was his hardest battle of the day.

“We are in a very tough zone. I thought the game against Pembroke Hall was the hardest victory. We’ve not played a practice game prior to this, so this tournament is really a warm-up for the ISSA Prep School competition,” said Jones.

Despite the flawless opening day for his charges, Jones still believes there is room for improvement.

“I still believe that we need to go back to the drawing board, but, overall, I think we did fairly well. The conditions were good for football, the crowd came out, so kudos to the organisers,” said Jones.

Shaun Williams, member of the organising committee, was pleased with the overall support from the football-loving public, and hopes the tournament will get better from here on in.

“We had a chance to see our young boys, and, of course our young girls, on an amazing, intense, passion-filled, joyful day of football. Just to see the smiles on their faces after years without football was worth all the effort and stress. It was a great day, and we appreciate all the support,” said Williams.

Williams further added that, despite the competition being an Under-11 tournament, the competitive nature was on display from kick-off.

“From once the ball is on the field, you know that the competitive juice starts to flow and you could see the passion in the kids. That Jamaican-ness, the drive to win, just a real good energy, and that was the highlight of the day,” said Williams.

Among the other heavy hitters on the day were Windward Road Primary, who hammered Tarrant Primary 10-0, and Clan Carthy, who dispatched Manning’s Hill Primary with a similar margin of victory.

The competition will continue on October 8 with another all-day preliminary round at the Cornwall College football field.